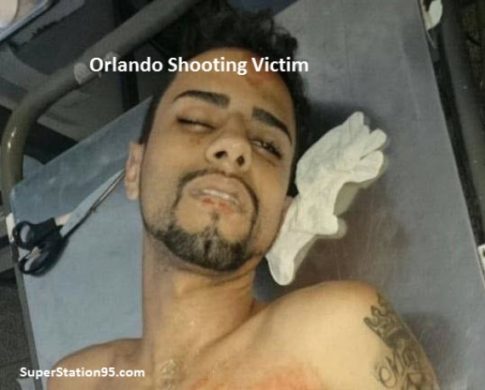 What are they hiding?

The HIPAA law already protects patient privacy, so staff are already forbidden to discuss patient injuries or treatment.  What else could be going on in that hospital, connected to this incident, that the feds want to keep secret?

Too bad for the government that the harder they try to conceal the facts, the MORE INFORMATION flows to us in the media!  Like the photo above; and a lot (really a LOT) more!

For instance, when will the authorities in Florida reveal that an individual allegedly named Byrion Parks was arrested as a “second shooter” in a bathroom on Floor 6A of the Orlando Regional Medical Center on the night of the Pulse Nightclub shooting . . .  only to be RELEASED by police?

It was, after all, this person who allegedly triggered the “Silver Alert” inside the hospital causing it to go into lock-down.

A Silver Alert is the code at the Orlando Regional Medical Center for “active shooter in the building.”

Was Byrion Parks a second shooter or was he just another victim?

The Media Relations telephone at Orlando Police Headquarters is never answered by a person.  All calls go to voice mail and at the end of the greeting, media callers find out “This mailbox is full and cannot accept any messages.” It’s been this way for about a week.

Why isn’t the Orlando Police Department cooperating with the media?

A number of the people being shown on television as “victims” of this incident have been shown to have profiles as “Actors” on the IMDb actor registry web site . . . including the alleged Shooter, Omar Mateen!

How is it that so many “Actors” just happen to be involved in this “attack?”

If these people were actually shot, how did they manage to get several hundred feet up the road — where there were no police — just to be carried back through an active shooting zone, be conveniently walked past the cameras, then loaded onto pick-up trucks to be removed from the scene?

The former wife of alleged shooter Omar Mateen has publicly stated Mateen was gay.  She has also publicly revealed that federal agents repeatedly told her to keep that information quiet!  The feds were allegedly emphatic with the first wife, that she not reveal Omar Mateen had gay tendencies.  Why?

In whose interest would it be to conceal the fact that the guy may have been gay?  Why ask the first wife to keep it quiet?

SO MANY MORE QUESTIONS

The questions above are just SOME of the questions that the media is confronted with and authorities are not only NOT answering, they’re compelling Hospital Workers to sign non-disclosure agreements!

A number of folks in the media are now quietly saying to each other that something stinks about this “mass shooting.”  This is compounded by a firestorm of claims rampaging through the Internet which claim that the entire “mass-murder” was some sort of “false flag” perpetrated by government to provide an excuse to impose gun control.  Those claims are raging and the refusal of authorities to provide answers is only compounding the problem.

Oh, one more thing:  About the photo at the top of this story . . . . we edited it.  We actually have the entire body photo, complete with bullet holes in the chest and the bloody underwear still on the body, as it lay on an examining table in what is presumably the Medical Examiner’s Office; we chose NOT to publish that complete image . . . yet.