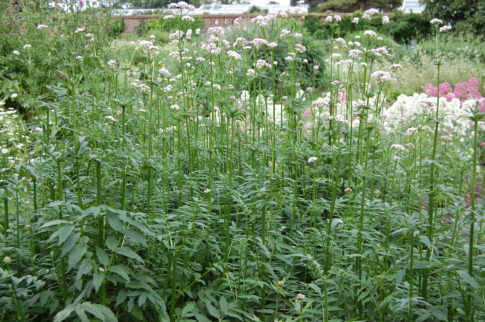 Valerian is used to relieve anxiety, stress, and insomnia. Drink valerian tea, or take it as a supplement, before bedtime, if you suffer from insomnia. For more information on valerian see the article down below.

Valerian is well known for its sedative qualities and its ability to relax the central nervous system and the smooth muscle groups. It has been used as a sleeping aid for hundreds of years especially when there is excitation or difficulty in falling to sleep due to nervousness. Over 120 chemical components are found in valerian and although a very complex herb, it has not been found to have any negative side effects with moderate use.

It is calming without exerting too sedative an effect and is practically non-addictive. It is a valuable treatment for insomnia, the sedative effect due to the valepotriates and the isovaleric acid.

At least two double-blind studies have demonstrated that valerian extract can significantly reduce the amount of time it takes people to fall asleep without changing the normal stages of sleep.

Documented research has noted a mild hypnotic action in both normal sleepers and insomniacs, indicated by a beneficial effect on sleep latency, wake-time after sleep, frequency of waking, nocturnal motor activity, inner restlessness and tension and quality of sleep. Sleepiness and dream recall the morning after were unaffected. The valepotriates have a regulatory effect on the autonomic nervous system; research suggests that they have a calming effect on agitated people but are also a stimulant in cases of fatigue.

Valerian is used in Europe as an antispasmodic, particularly for abdominal cramps due to nervousness and for uterine cramps and menstrual agitation. It helps relieve dysmenorrhoea and it can be of benefit in migraine and rheumatic pain. It may also be applied locally as a treatment for cramps and other muscle tensions.

Valerian is also used as a mild tranquilizer for people experiencing emotional stress, much as anti-anxiety drugs are prescribed and has been prescribed for exhaustion. Valerian has occasionally been tried as part of a program to take a patient off antidepressants or benzodiazepines, and is sometimes used as a muscle relaxant to treat pain.

Valerian does not impair driving ability and produces no morning hangover effect. It is a gentle relaxant and an effective sleep aid.

Millions of people have difficulty sleeping and the pharmaceutical industry has cashed in on the problem to the tune of billions of dollars. But herbal sleep aids can be as effective as the powerful prescription sedatives such as valium and other narcotic type drugs.

A course of treatment should not exceed 3 months.

It should not be used by patients with liver problems.

It should not be taken in conjunction with sleep-inducing medication.

3 thoughts on “Donation & The Benefits Of Valerian (Valeriana officinalis)”