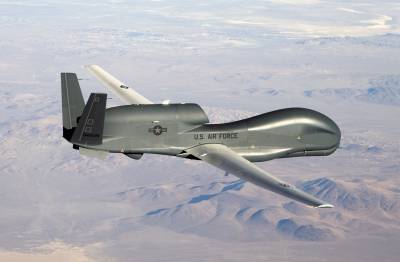 A Global Hawk was commandeered and landed in Simferopol

– The Russians Have Already Shot Down Numerous US Drones Violating Crimean Airspace:

And one of them, the mother of all drones, the massive Northrop Grumman RQ-4 Global Hawk, was apparently commandeered by Russian electronic warfare and landed in Simferopol

The war you don’t hear about: numerous American military aircraft (albeit of the unmanned variety, though with the possibility of being armed and dangerous) have apparently been violating Russian airspace, leading to the Russians shooting – yes, shooting – them down following the refusal of the Americans to acknowledge Russian diplomatic notes of protest.

The military violation of the territory, including the airspace, of a sovereign state is ordinarily taken to be a casus belli – an act of war.

But to be fair to the Americans, they may justify their belligerent behavior, flagrantly refusing to respect Russia’s sovereignty, on the basis that they do not recognize Crimea to be a part of Russia. Therefore, they do not recognize any violation of the airspace of Russia as having taken place. Rather, they would contend that the American aircraft in question were flying within the sovereign territory of Ukraine, with the permission of the government with the only legitimate authority to grant or refuse such permission, namely the government of Ukraine.

Note that these are not exchanges of fire through proxies, as happened throughout the Cold War and is happening now through Syria and in the east of Ukraine. No, these are two nuclear-armed powers already in the process of shooting at each other!

Are we already in the opening stages of World War III? How many minutes to midnight is the nuclear clock? May God help us all.