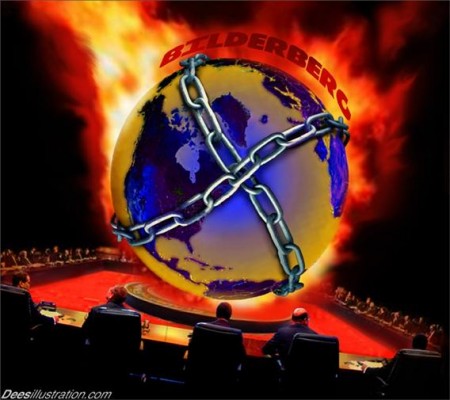 Every year, the world’s richest and most powerful business executives, bankers, media heads and politicians sit down in some luxurious and heavily guarded venue, and discuss how to shape the world in a way that maximizes profits for all involved, while perpetuating a status quo that has been highly beneficial for a select few, even if it means the ongoing destruction of the middle class. We are talking, of course, about the annual, and always secretive, Bilderberg meeting.

And, as the Guardian notes, “you know Bilderberg’s about to begin when you start seeing the guns.” 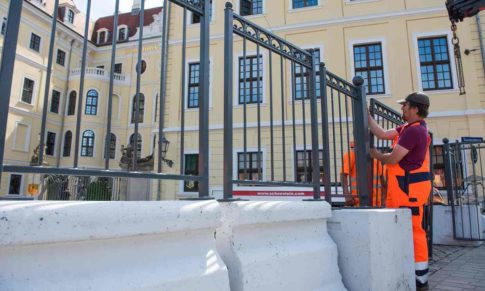 Workers erect a barricade outside the Taschenbergpalais hotel in Dresden

The Taschenbergpalais hotel in Dresden – the venue of “Bilderberg 2016” which starts tomorrow and continues until June 12 – is filling up with pistol-packing plainclothes security as the last guests are ushered out. The frowning gunslingers head up and down the corridors with their hotel maps, trying door handles and checking the lay of the land while, down in the hotel lobby, corporate goons gather in muttering huddles.

A glimpse at what is about to unfold: according to the local newspaper DNN, at least 400 police officers will be surrounding the venue for the three days of the talks. There’s already a ring of concrete blocks around the entrance.

Is that not enough? What are they expecting? The charge of the light brigade?

The hotel is being trussed up tighter than Reid Hoffman’s trousers. No one gets in or out without the right lanyard. As Ed Balls remembers only too well, from that awkward business in Copenhagen. Inside the security cordon, the final nervy tweaks are being made by conference staff. They’ve got to make sure Henry Kissinger’s curtains don’t let any light in. A single ray could be fatal.

Year after year, a sizeable number of extremely rich and powerful workaholics seem to think it’s worth strapping on their Bilderberg lanyard. But why? What’s getting the head of Google, two prime ministers, a vice-president of the European commission and the chairman of HSBC together in the same hotel basement for the same three days in June?  On its official website, Bilderberg attempts an answer. It describes itself as “a forum for informal discussions” that are “designed to foster dialogue between Europe and North America”. Dialogue which is designed to foster dialogue. Talk for talk’s sake.

Of course, as Charlie Skelton notes, that’s nonsense. And yet Bilderberg insists “there is no desired outcome”. That’s like a Club 18-30 rep saying there’s no desired outcome of his tequila groin-slurping contest. Someone’s getting something out of the event. Even if that something is chlamydia. 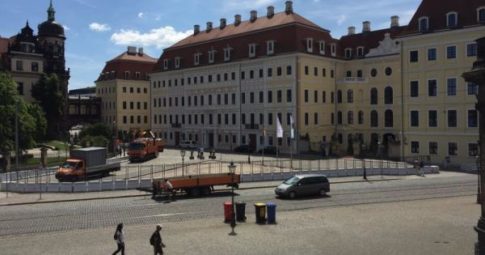 What is really discussed is how to take the existing trends in the world, some favorable, some undesired, and mold them in such a way as to create even more wealth for the world’s 0.01%, while perpetutating the existing system, one which even the IMF agrees is no longer working.

This time, as Paul Joseph Watson infers, the secretive Bilderberg Group whose Steering Committee Advisory Group consists of one David Rockefeller, will discuss how to prevent Donald Trump from becoming president, the possibility of mass riots as a result of wealth inequality, the migrant crisis, as well as the United Kingdom’s vote on leaving the European Union.

As noted above, the official list of “key topics” to be discussed is both broad quite vague and includes:

That’s just for public consumption. After all, who needs massive concrete blocks and 400 police officers for protection to discuss “technological innovation” – better yet, just open up the session to the press and public.

Of course, that won’t happen, because the real agenda must remain under wraps. However one can infer from the agenda and some of the names on the participant list what the group will be discussing in more detail. As PJW writes, the attendance of anti-Trump Senator Lindsey Graham is an obvious sign that Donald Trump will be a prominent topic of discussion at this year’s Bilderberg meeting, with the likely focus on how to prevent Trump from defeating Bilderberg’s chosen candidate, Hillary Clinton, who has already raked in tens of millions in fees from “speaking” before numerous participants at the meeting that begins tomorrow.

In 2015, the Bilderberg elite was confident that Clinton could shake off her GOP challengers, but Trump’s self-funded campaign and his public opposition to globalism and internationalist trade deals like NAFTA has shocked the Bilderberg elitists. As a result, it will now have to spend much more time dealing with the damage control.

Brexit will be another major topic. With the British referendum vote to leave the EU taking place in just two weeks, and with David Cameron getting concerned, a vote to secede threatens the future of the European Union federal superstate that was the brainchild of Bilderberg in the first place.

The inclusion of “precariat and middle class” on the list also means that the powerful lobby group will be ruminating on how they can exploit and manage the inevitability of more riots and civil unrest in the west – and increasingly, the east with an emphasis on China whose government is terrified about the prospect of rising social unrest – a topic that elitists were also concerned about at the 2015 Davos Economic Summit. “Precariat” describes those who are struggling to survive in today’s economy and who have no long term wage security. Studies have shown that wealth inequality increases the likelihood of mass social disorder. Furthermore, as the Fed itself admitted recently, it is the Fed, by way of manipulating markets higher, that has been an instrumental catalyst behind record wealth inequality.

The flooding of Europe with third world migrants, a process which has driven European voters into the arms of nationalist parties that typically oppose Bilderberg’s wider agenda, will also be a key topic of discussion, as per bullet point 3.

As Watson observes, aone interesting name that pops up on this year’s list is that of Richard Engel, NBC News’ chief foreign correspondent.  “Normally, a semi-secret meeting of over 100 of the most powerful people on the planet would be a monumental news scoop, but don’t expect Engel to utter a word.” After all, real journalists are not allowed anywhere on the premises; Engel likely has to sign an NDA.

Indeed, Bilderberg operates under Chatham House Rules, which means that none of the participants are able to reveal any comments made during the conference. As the Guardian floridly puts it, “after the politicians drag their drained and bloodless bodies back to their respective parliaments, they don’t say a word about what happened. They act like abuse victims. “It’s just our little secret,” murmurs Kissinger as he pops the politicians back in their limos. “Chatham House rules. You remember? Yes, of course you do. Now off you go.” And he nimbly licks a heart shape on to the car window with his black tongue before it speeds off.”

Although it was reported in the German media that German Chancellor Angela Merkel would attend this year’s conference, her name does not appear on the list. However, it is a common practice for Bilderberg to omit names from the official list if the individual’s attendance is politically sensitive.

So what do the politicians and public officials get from the deal? For the more ruthless, it’s a chance to line up future employment. As the Guardian reminds us of the then head of MI6, Sir John Sawers, networking with the chairman of BP on a Copenhagen patio in 2014. A year later he was sitting on the oil firm’s board of directors.

For those who don’t use the event as a glorified LinkedIn mixed for billionaires, the motive is far simpler: make even more money. In this regard the Guardian’s amusing conclusion is spot on:

Tony Blair admitted he found the 1993 conference “useful”. And I’m sure it was. It’s useful to know in what direction in the world is being led by the people that own it, so you can trot along in the right direction. And if you learn to play the game, to fit in with the in crowd, then maybe, like Blair, you can end up with a cushy job with US investment bank JP Morgan.

Ultimately, what is decided will never see the light of day, or rather it won’t over the next 4 days. Instead it will emerge as official policy, fiscal but mostly monetary as central bankers live to serve the Bilderberg elite, laws, regulations, and social norms. And if history is any indicator, it will only make the current global situation even worse.

Below is a full list of this year’s participants:

Finally, for those who are skeptical about the massive power and reach of the relatively small Bilderberg group, here is a recent graph which shows the members’ connections to virtually every important and relevant organization, company and political entity in the world. 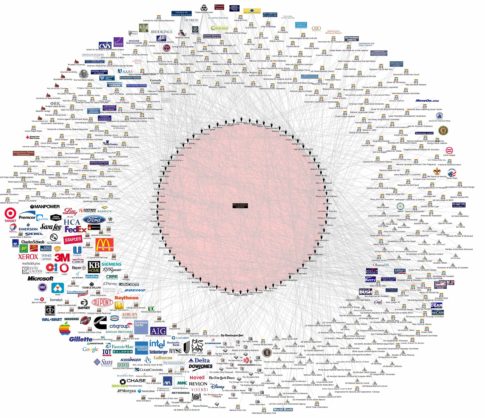