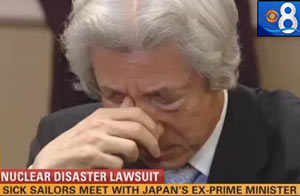 – Spike in number of US sailors dying after Fukushima radiation exposure — Now over 400 veterans suffering serious illnesses — Former Japan Prime Minister breaks down crying, “This can’t be ignored any longer… The number of sick people is increasing and their symptoms are worsening” (VIDEOS):

Kyodo, May 19, 2016: Former Prime Minister Junichiro Koizumi has thrown his support behind a group of former U.S. sailors suing the operator of the Fukushima No. 1 nuclear plant… Speaking at a news conference Tuesday in Carlsbad, California, with some of the plaintiffs, Koizumi said, “Those who gave their all to assist Japan are now suffering from serious illness… I learned that the number of sick people is still increasing, and their symptoms are worsening,” he told the news conference… According to lawyers for the group, seven of its members have died so far, including some from leukemia [Three deaths had been reported as of last July].

Asahi Shimbun, May 19, 2016: Former Prime Minister Junichiro Koizumi broke down in tears as he made an emotional plea of support for U.S. Navy sailors beset by health problems… More than 400 veterans who were part of a mission called Operation Tomodachi… filed a mass lawsuit in California against [TEPCO]. They are seeking compensation and an explanation for their health problems… Koizumi said: “U.S. military personnel who did their utmost in providing relief are now suffering from serious illnesses. We cannot ignore the situation.” Apparently overcome with emotion, Koizumi started crying… Theodore Holcomb [was] diagnosed with synovial sarcoma, a rare form of cancer. He died in 2014 at age 35. The Department of Veterans Affairs later cut off a study into the causal relationship between his exposure to radiation and his illness… Ron Wright, 26, worked on the deck [and] developed a swelling of the testicles and underwent surgery four times… A military doctor told him there was no relationship between his illness and exposure to radiation.

CBS San Diego, May 18, 2016: Sick sailors meet with Japan’s former prime minister… The USS Reagan sailed through a nuclear plume and crews had to spend hours decontaminating the vessel. Sailors now say they are suffering from radiation exposure. “Honestly, I just want to feel better,” said Chad Holt, who served on the USS Ronald Reagan… “A lot of people, they can’t physically see something wrong with you. They think there is nothing wrong with you. That is not the case what we are living with on a daily basis,” said Daniel Hair, who is now retired from the Navy… “I realized this is something that can’t be skipped over, can’t be ignored any longer. The three claims of being safe, cheap and clean were all lies,” [Koizumi] said.

NBC San Diego, May 18, 2016: Many of the sailors say doctors refused to connect their illnesses with the radiation exposure. “You have to experience it,” said William Zeller. “You have to experience the doctor telling you to your face. You have to experience the years of pain when everyone tells you ‘You know you’re fine.’”… “I realize this is not something that can be just skipped over and can’t be ignored any longer,” [Koizumi] said. “Everyone played a role in not shedding more light on this problem…” Koizumi said… The sailors’ attorney said they have won their case against Tokyo Electric Power Company twice, however the company has appealed the judge’s decisions. It is still unclear how exactly the sailors will be compensated…

San Diego Union Tribune, May 17, 2016: Koizumi [said] he believes the service members’ illnesses, reported to include leukemia and tumors, were caused by the 2011 exposure, despite U.S. government findings to the contrary… Koizumi said the Japanese government and [TEPCO] should support the radiation-exposed U.S troops financially and “across the board.”