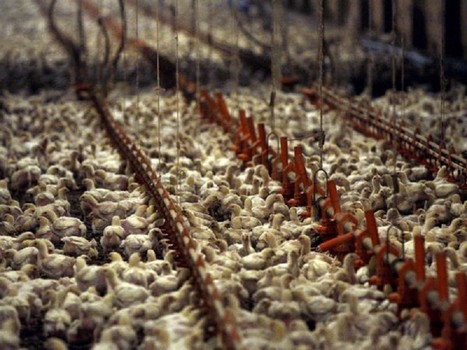 Chickens produced in industrial settings live an average of 49 days, far too short to study long-term safety effects of their grain-intensive diets

A new study about the purported safety of genetically modified organisms, or GMOs, was released to the public this month by former Monsanto employee Dr. Alison Van Eenennaam. The Monsanto Company is best known for creating and marketing genetically modified seeds that contain their own pesticides or which are designed to withstand applications of the company’s flagship herbicide Roundup (active ingredient: glyphosate).

Dr. Van Eenennaam’s study has been loudly touted by pro-GMO talking-heads, who claim it has “ended the debate” about the safety of GMOs in the food chain. The claim is impressive: over 100 billion animals consuming a total exceeding 1 trillion meals of genetically modified grain over a 19-year period show no statistical difference in health when compared with livestock fed a conventional diet.

Unfortunately for Van Eenennaam (and the circus of biotech industry bloggers promoting her), the claim is not supported by the evidence in her meta-analysis of livestock data.

Animal scientist Dr. Ena Valikov and other experts have offered up excellent rebuttals of the Van Eenennaam study, which are outlined below.

First, it’s important to scrutinize the “100 billion animals” the author claims to have studied.

Nearly 95 percent of the approximately 100 billion animals in the study are broiler chickens. These chickens would have a natural lifespan of about 5 years, but they don’t live anywhere near that long in food production. Most are killed in their first 49 days.

In other words, this isn’t a long-term study of animals living a full life-cycle. Instead, it’s mostly a study of 19 years’ worth of data on 49 day-old chickens.

A real safety study should also be examining toxicology and/or histopathology data. But the Van Eenennaam study is mostly made-up of livestock production data, which focuses on animal weight, feed efficiency, and the amount of time it took to get an animal ready for market.

“There isn’t a single citation showing a precedent for using these limited livestock production values to show lack of harm to animal health, which differs significantly from livestock performance,” said Dr. Valikov.

Even more interestingly, the data used in the study is made up almost entirely from statistics reported by the pro-industry Chicken Council. It’s incredible that Van Eenennaam would try to pass this off as even remotely useful for evaluating human safety.

But even if Van Eenennaam were serious about the chicken data, what exactly would it show? Well, since it’s almost exclusively about feeding efficiency and carcass weights, if we assumed the GMO grains being fed to the broiler chickens lead to improved weight gain (known as feed conversion ratio), we could potentially attribute the human obesity epidemic to GMOs. This probably isn’t the conclusion Van Eenennaam was going for.

Most of the remaining 5% of the data comes from dairy and beef cattle. Both suffer from the same shortened lifespan (approximately 4 years out of an expected 15-plus year natural lifespan), making a full life-cycle analysis impossible. And to complicate matters, the study doesn’t control for factors like hygiene, sanitation, or antibiotic use. Simply looking at milk production values or cattle weight tells us nothing about digestive, organ, or immune system health (which may also be obscured by the prolific rates of antibiotic use in modern industrial cattle production).

So in conclusion, we have a researcher with close ties to the biotech industry using poor data to make baseless assumptions about the safety of products which weren’t even controlled for in her study. The data mostly consists of livestock production values, not toxicology or histopathology data, and very poor model organisms (broiler chickens) were used for the vast majority of the data tables. Finally, it is deceptive to promote this study as a “long-term analysis of safety”, considering the shortened lifespans of the animals in question and the lack of any medically useful data.