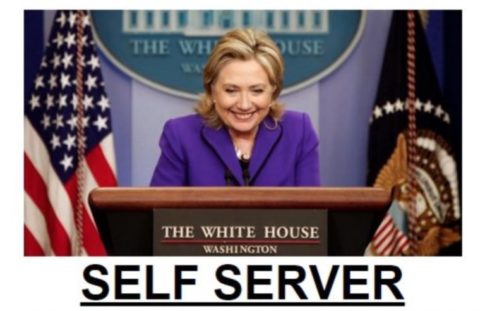 – Just How Shady is Hillary Clinton? This Shady…:

The American people are sick and tired of hearing about your damn emails.

Boy was Bernie Sanders wrong about that. It turns out the Hillary Clinton email scandal is way more damaging and dishonest than even her harshest critics could have imagined.

I’m sure that by now most of you are intimately aware of the scathing report issued by the State Department inspector general regarding Hillary Clinton’s unconscionable use of a private server for all her official government emails. It’s now clear that this was no honest mistake, but rather a deliberate attempt to shield her correspondence from the American people.

Judge Andrew Napolitano has penned a must read piece about the whole affair at Reason titled, Inspector General’s Report Refutes All of Hillary Clinton’s Defenses For Using Private Email Server. Here are a few choice excerpts:

The inspector general interviewed Clinton’s three immediate predecessors — Madeleine Albright, Colin Powell and Condoleezza Rice — and their former aides about their email practices. He learned that none of them used emails as extensively as Clinton, none used a private server and, though Powell and Rice occasionally replied to government emails using private accounts, none used a private account when dealing with state secrets.

Clinton and her former aides declined to cooperate with the inspector general, notwithstanding her oft-stated claim that she “can’t wait” to meet with officials and clear the air about her emails.

The inspector general’s report is damning to Clinton. It refutes every defense she has offered to the allegation that she mishandled state secrets. It revealed an email that hadn’t been publicly made known showing Clinton’s state of mind. And it paints a picture of a self-isolated secretary of state stubbornly refusing to comply with federal law for venal reasons; she simply did not want to be held accountable for her official behavior.

The report rejects Clinton’s argument that her use of a private server “was allowed.” The report makes clear that it was not allowed, nor did she seek permission to use it. She did not inform the FBI, which had tutored her on the lawful handling of state secrets, and she did not inform her own State Department IT folks.

The report also makes clear that had she sought permission to use her own server as the instrument through which all of her email traffic passed, such a request would have been flatly denied.

All of that’s bad enough, but here’s the shadiest part of all.

Here is what is new publicly: When her private server was down and her BlackBerry immobilized for days at a time, she refused to use a government-issued BlackBerry because of her fear of the Freedom of Information Act. She preferred to go dark, or back to the 19th-century technology of having documents read aloud to her.

So how do the Clinton people plan on spinning this gigantic debacle?

We know that Clinton’s own camp finally recognizes just how dangerous this email controversy has become for her. Over the Memorial Day weekend, John Podesta, the chairman of Clinton’s campaign, sent an email to her most important donors. In it, he recognizes the need to arm the donors with talking points to address Clinton’s rapidly deteriorating support with Democratic primary voters.

The Podesta email suggests attempting to minimize Clinton’s use of her private server by comparing it to Powell’s occasional use of his personal email account. This is a risky and faulty comparison. None of Powell’s emails from his private account — only two or three dozen — contained matters that were confidential, secret or top-secret.

Good ol’ John Podesta. You know, the brother of Tony Podesta of the Podesta Group, a major lobbyist for the terrorist state of Saudi Arabia. These guys make a living from putting lipstick on pigs.

Recall: “Getting Things Done” – The Brother of Hillary Clinton’s Campaign Chair is a Major Lobbyist for Saudi Arabia

If you are curious as to why the inspector general of the State Department during Clinton’s years as secretary did not discover all of Clinton’s lawbreaking while she was doing it, the answer will alarm but probably not surprise you.

There was no inspector general at the State Department during Clinton’s tenure as secretary – a state of affairs unique in modern history; and she knew that. How much more knowledge of her manipulations will the Justice Department tolerate before enforcing the law?