As we detailed previously, a group of protesters attacked Donald Trump supporters who were leaving the presidential candidate’s rally in San Jose on Thursday night. A dozen or more people were punched, at least one person was pelted with an egg and Trump hats grabbed from supporters were set on fire on the ground.

Full video of the chaotic situation…

This @Timcast video from the #Trump protest in San Jose is really disturbing. https://t.co/wTp8idVvJH

Social media is awash with videos of the events…

Our video of Trump supporter who says he was beaten up coming out of @realDonaldTrump rally. pic.twitter.com/PQSxjXfonl

JUST IN: Trump supporters being attacked, assaulted by protestors outside Trump rally in San Jose – @Jacobnbchttps://t.co/l7Lrhd7b9a

I called 911 but no one answered. Donald trump protest in San Jose, CA pic.twitter.com/LwaWyeYZfq

The growing division that led to this are evident as AP reports,

Protesters before the speech included Adam Rivas, a 22-year-old community college student who was born and raised in San Jose, was holding a spray-painted sign that read “Dump Trump.”

Rivas said he was particularly disturbed by Trump’s remarks about Mexicans.

“For any one Mexican here he bashes, there are about 20 Mexicans out there who are hard-working and just doing their job,” he said.

Trump supporter Debbie Tracey, a U.S. Navy veteran from San Jose, she came to hear Trump speak, she left his rally with two hats a T-shirt and a handful of signs that said “Veterans for Trump.”

Passing in front of a wall of protesters, many chanting in Spanish, she said she supported Trump’s call for a wall along the U.S.-Mexico border.

“I’ll go help build the wall because if you are going to come to this country, land of opportunity, you should be here legally,” she said.

But as AP reports, according to the city’s mayor, these terrible scenes were not the fault of the people engaged in the violence…

“Our police officers have done an extremely courageous and professional job so far,” San Jose Mayor Sam Liccardo told The Associated Press by phone. “We’re all still holding our breath to see the outcome of this dangerous and explosive situation.”

The mayor, a Democrat and Hillary Clinton supporter, criticized Trump for coming to cities and igniting problems that local police departments had to deal with.

“At some point Donald Trump needs to take responsibility for the irresponsible behavior of his campaign,” Liccardo said.

What many remarked upon, as AP reports, is the police’s oddly subdued reaction to the massive street brawl…

Police stood their ground at first but after about 90 minutes moved into the remaining crowd to break it up and make arrests. At least four people were taken into custody, though police didn’t release total arrest figures Thursday night. One officer was assaulted, police Sgt. Enrique Garcia said.

Police were keeping their distance from the crowd as the scuffles played out, but keeping them from getting any closer to the convention center.

Breitbart noted that several journalists and Trump supporters complained that police did little to stop the violence. However, after the first few incidents, they moved protesters a block away in all directions. Breitbart News witnessed several Trump supporters thanking the police as they left the venue. One shouted: “Police lives matter!” An officer responded: “Thank you.”

So in one of the most affluent cities in America, police stood by and, as far as we are aware, arrested no one after a massive street brawl where bloody violence erupted? And the city’s mayor is major Hillary supporter? 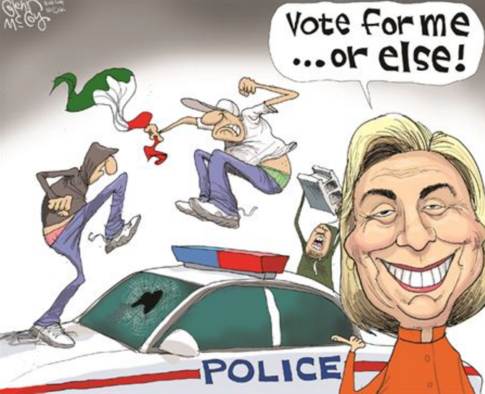 And finally, we have just one more thing to add…