Again, … this is the Greatest Depression.

So much for that much anticipated rebound in the participation rate. After it had managed to rise for 5 months in a row through March, hitting the highest level in one year, the disenchantment with working has returned, and the labor force participation rate promptly slumped in both April and May, sliding 0.4% in the past two months to 62.60%, just shy of its 35 year low of 62.4% hit last October. This can be seen in the surge of Americans who are no longer in the labor force, who spiked by 664,000 in May, hitting an all time high of 94.7 million. As a result of this the US labor force shrank by over 400,000 to 158,466K, down from 158,924K a month ago, and helped the unemployment rate tumble to 4.7%, the lowest level since 2007.

Adding the number of unemployed workers to the people not in the labor force, there are now over 102 million Americans who are either unemployment or no longer looking for work. 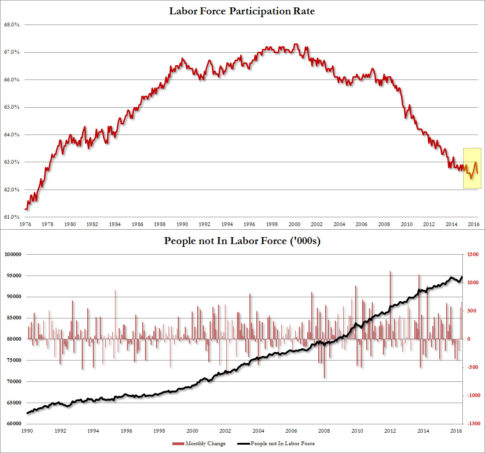