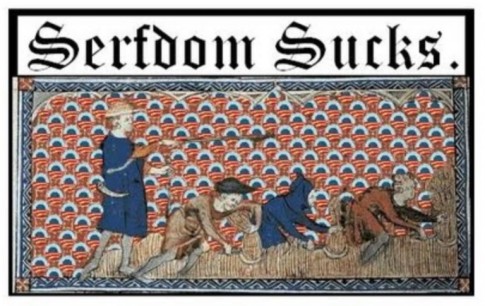 – American Serfdom – Companies Are Offering Loans for Living Expenses to Their Destitute Employees:

Bernanke and the Federal Reserve are nothing but criminal butlers for the oligarchy. The proof is undeniable at this point. While this unaccountable banking cartel promised us that 0% rates would help the economy, America’s growing underclasses are paying 100% rates for loans to buy sofas and pay for food, more than five years into this so-called “recovery. Meanwhile, the only segment of society with access to low interest rates are the very wealthy financial oligarchs who leverage this cheap money to speculate on financial assets and real estate. So yes, the Fed (Central Banking in general) is completely to blame for the world’s growing inequality, as are their submissive, compliant defenders in academia, “journalism” and within the halls of power in Washington D.C.

There is no recovery. The only thing we’ve experienced over the past eight years of Obama is a historic plundering and strip mining of the U.S. economy by a handful of oligarchs and their political and bureaucratic minions.

The evidence has been clear for years. Fully employed Americans have been borrowing from payday lenders at egregious rates in order to pay for normal everyday living expenses, while a small group of executives grab as much as possible for themselves. You can see this in corporate profits margins at historically high levels and in the use of cash to buyback shares as opposed to paying employees a living wage. To see just how grotesquely out of whack the economy has become under the crony policies of Obama and the Federal Reserve, let’s revisit what I like to call the “Serfdom Chart.” 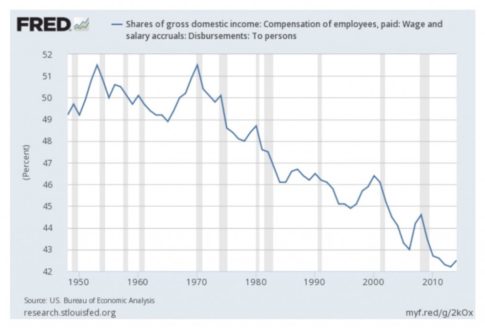 If the above chart looks like the inverse of the S&P 500 index to you, this is no illusion. Share prices in America aren’t at all time highs because the country is doing well. Share prices are at all time highs because executives and shareholders are extracting a historically dangerous piece of the overall economic pie. If this trend continues, someone like Donald Trump will be the least of our concerns.

It appears companies are coming to the realization that their employees are so broke they’re resorting to payday lenders just to survive. Rather than boost wages, many are resorting to offering loans.

So the Warren, N.J., employer of call-center workers and cable installers began offering employees a new benefit: low-interest loans to help pay for things such as car repairs and health expenses.

Worried about their financially strapped workforce, a handful of companies are stepping in to offer employees alternatives to payday loans and other expensive financial products.

While few other employers go that far, managers know that financial worries are taking a toll on U.S. workers. A recent PwC survey of 1,600 full-time employed adults found that 40% find it difficult to meet monthly household expenses and 51% consistently carry balances on their credit cards.

Payday loans, which are typically made in small amounts and come due on a person’s next payday, can carry fees equivalent to an annual percentage rate of almost 400%, according to the federal Consumer Financial Protection Bureau.

Some 12 million Americans use payday loans each year, according to Alex Horowitz, senior research officer with the Pew Charitable Trusts’ small-dollar loans project.

Retirement borrowing remains common, too. According to the Employee Benefit Research Institute, 20% of all eligible 401(k) participants had loans outstanding against their 401(k) plan accounts at the end of 2014, up from 18% in 2008.

As an alternative, employers are joining with firms such as Kashable LLC, Ziero Financial Inc. and Zebit Inc. to help fund and service loans. Some companies are offering those products in conjunction with employee-focused seminars about saving, budgeting and debt.

Such loans could end up putting employees further into debt, critics say, especially if workers are unable to keep their spending in check. Loans “need to be utilized with some caution,” said Kent Allison,national leader of consulting firm PwC’s employee financial wellness practice.

Some employers aren’t eager to offer loans, either, but say their employees lack other good options.

Barbara Snyder, vice president of human resources at Atlantic American Corp, said she didn’t want to get into the loan business.

Many of the 100 employees of the Atlanta insurance provider “live paycheck to paycheck,” she said, and were borrowing against their 401(k)s. After realizing the company wouldn’t be liable if employees defaulted, she signed up with Kashable about two years ago.

Kashable’s interest rates typically range from about 6% to the high teens, lower than what people with middling or low credit might get on their own, said founder Einat Steklov.

While a far better option than payday loans, “6% to the high teens” is still a huge interest rate considering pension funds can’t find anywhere to reasonably invest and earn such a return. It also shows you that the 0% interest rate targeted by the Federal Reserve doesn’t trickle down to the peasants. It only further enriches the financial parasite class.

Loan payments are deducted from employee paychecks, with loan terms lasting from six months to three years. If employees leave their jobs, they continue paying from their own bank accounts, said Ms. Steklov.

“Not offering a low-cost loan option is not going to prevent people from getting a loan,” she adds. “By not offering, we are going to force them to do something worse.”

Perhaps the above is true. Perhaps many of these companies really are trying to help. That’s actually besides the point. The much bigger point is that employed American citizens are so destitute they can’t survive without taking out loans for everyday expenses.

If nothing else, this should prove to everyone that the U.S. economy has become a grotesque, unsustainable, cancerous monster. It’s an unethical creation of oligarchy for oligarchy; a parasitic blob that solely exists to reward the already rich and powerful. What no longer benefits the nation’s citizens in any meaningful way needs to be fundamentally transformed before the entire fabric of society snaps and we are left with a far worse outcome. The clock is ticking.

For more on this very disturbing and well established trend, see:

The Oligarch Recovery – U.S. Military Veterans are Selling Their Pensions in Order to Pay the Bills

It’s way past the time to stop being suckers. 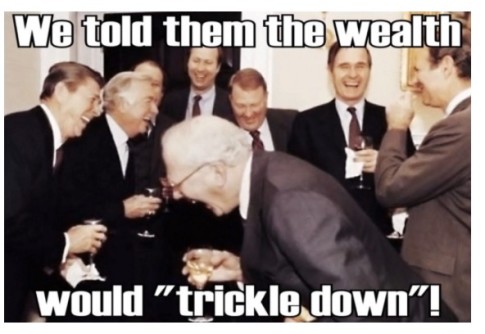