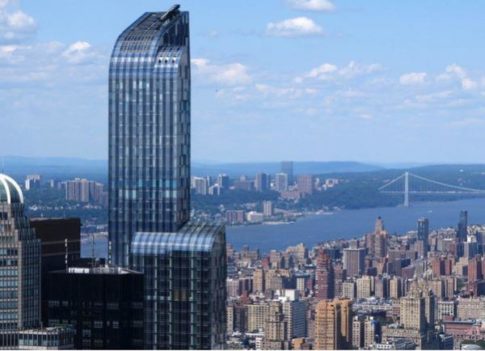 – Peak Insanity: This “Trophy Apartment” In Manhattan Is Going For A Cool $250 Million:

In April we pointed out that due to an already abundant supply of condos on the market, luxury real estate developer Extell Development Co couldn’t sell luxury condo’s at its One57 tower, in the heart of New York’s premier ultra luxury destination.

Extell decided that instead of leasing luxury apartments, it would sell the units as higher end apartments in order to fill vacancies and generate cash. As a reminder, Bill Ackman paid $91.5 million for a condo in One57 in April of 2015 just “for fun” in hopes of flipping the unit at some point.

As luck would have it, Ackman now has an even bigger investment opportunity in One57.

Extell Development filed documents in April with the state attorney general’s office which revealed that there is a “trophy apartment” (prices ranging from $10 million to $45 million) for sale in the complex, with a price tag of a cool $250 million.

The $250 million price tag obliterates the previous high-profile sale of a $88 million penthouse just a walk away at 15 Central Park West in 2012 to a Russian mogul by Sanford Weill, the American financier and philanthropist, who had purchased the apartment four years earlier for half that. Jonathan Miller, an independent appraiser said:

“That $88 million sale triggered the sense that there was this yet-to-be-harvested, nine-digit New York housing market. We started to see a frenzy of $100 million listings – what I call aspirational pricing.”

Who is going to purchase the apartment for such an insane price remains to be seen, but if we had to guess the owners behind the purchase will reside in China.

1 thought on “Peak Insanity: This “Trophy Apartment” In Manhattan Is Going For A Cool $250 Million”