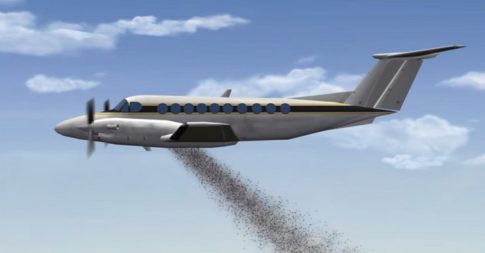 (ANONHQ) As a result of deforestation, only 6.2 million square kilometers remain of the original 16 million square kilometers of forest that formerly covered Earth. Apart from adversely impacting people’s livelihoods, rampant deforestation around the world is threatening a wide range of tree species, including the Brazil nut and the plants that produce cacao and açaí palm; animal species, including critically-endangered monkeys in the remote forests of Vietnam’s Central Highlands, and contributing to climate change instead of mitigating it (15% of all greenhouse gas emissions are the result of deforestation).

While the world’s forest cover is being unabashedly destroyed by industrial agriculture, cattle ranching, illegal logging and infrastructure projects, Thailand has found a unique way to repair its deforested land: by using a farming technique called seed bombing or aerial reforestation, where trees and other crops are planted by being thrown or dropped from an airplane or flying drone.

The idea of seed bombing first germinated in Japan with the ancient practice of “tsuchi dango” or “earth dumpling.” In the 20th century, Masanobu Fukuoka, an advocate of “Do Nothing Farming,” popularized the idea.  The earliest known record of seed bombing goes back to 1930, when planes were used to reforest certain areas in the mountains of Honolulu.

But the idea to adopt the seed farming on an industrial scale, to repopulate vast areas with trees, didn’t get the required attention until 1999, when the US manufacturer Lockheed Martin Aerospace planned to plant 900,000 young trees in a day. Their plan to use huge C-130 transport aircraft, normally used by the military for laying carpets of landmines across combat zones, was considered for Scotland – at half the cost of manual methods.

Planes are widely used to fight wildfires, drop relief material in times of calamities, fly, as  well as bomb people, but the idea of repairing what we destroyed – even with a 70% success rate – is our best weapon against deforestation. What do you think? Please share your thoughts in the comment section below.