– Is There Ample Evidence To Indict Hillary? This Judge Thinks So:

After the latest State Department announcement that Hillary Clinton violated government rules, Judge Andrew Napolitano definitively says there is now ample evidence to indict. Sadly, he is much less certain on whether or not the indictment will actually come. 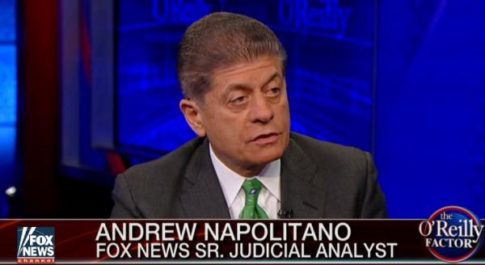 Here is Napolitano’s case as he laid it out to Bill O’reilly:

“Today is a big deal for a couple of reasons. First, it directly refutes a statement she has made dozens of times, ‘it was allowed’, we now know that it was not allowed. She never even asked.“

“She signed a two page statement under oath on her first day on the job which was given after she had a two hour tutorial by two FBI agents telling her about the proper care and legal obligations for state secrets. In that oath she swore that she had the obligation to know how to care for state secrets and to recognize them.”

“Here is what’s new in the report today. Her server in her house went down a couple of times, and when it went down the blackberry wouldn’t work. The state department IT people said ‘here use a state department blackberry’, and she said through her assistant Huma Abedin ‘no because we are concerned with the Freedom of Information Act’, so she went dark and she had documents verbally read to her rather than transmitted to her through the state department email system.”

When Bill O’reilly was surprised to hear about the fact that Clinton was concerned about having documents subject to FOIA, Napolitano hammers home the the point that now the FBI has intent.

“Now what does this tell the FBI? This shows intent. You don’t have to prove intent when you’re talking about espionage, you can prove it by gross negligence, there’s ample evidence of gross negligence. But avoiding the transparency laws shows a consciousness of evading the requirements.”

On whether or not Napolitano believes, after all of the above, that Clinton will actually be indicted, the judge wasn’t so sure.

“I believe there’s ample evidence to indict her and the only way she wouldn’t be is if the president or the attorney general makes a political decision.”

And just as we said long ago, Napolitano also believes that one way or another, the FBI will get the evidence out to the public.

“Whether she’s indicted or not I believe we’ll learn what it is. I believe it’ll happen before the Democratic National Convention in Philadelphia, that’s two months.”

Well then, based on Obama’s guarantee that there will be absolutely no political influence in the decision on whether or not the DOJ decides to indict, we should expect the indictment in the coming months… right?

Watch the latest video at video.foxnews.com