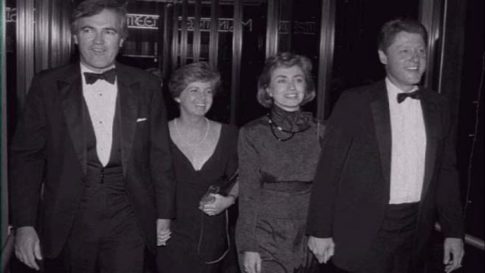 Just hours after Donald Trump released a clip in which the presumptive Republican presidential candidate hinted at Bill Clinton’s sexual transgressions which featured audio of two women – Kathleen Willey and Juanita Broaddrick – who have made rape accusations against Bill Clinton, Trump escalated his attack on Hillary and Bill Clinton in an interview with WaPo in which Trump called the circumstances of Vincent Foster’s death “very fishy.”

“He had intimate knowledge of what was going on,” Trump said of Foster’s relationship with the Clintons. “He knew everything that was going on and then all of a sudden he committed suicide.”

As a reminder, Vince Foster, a longtime friend of the Clintons, was deputy White House counsel in the first few months of Clinton’s presidency.  He was found dead from a gunshot wound to the mouth in July 1993. The three official investigations into Foster’s death concluded he committed suicide as he suffered from depression, however unproven theories have constantly swirled that the Clintons were involved in Foster’s death.

The Washington Post was not pleased, saying that “Trump is reviving some of the ugliest political chapters of the 1990s with escalating personal attacks on Bill Clinton’s character, part of a concerted effort to smother Hillary Clinton’s campaign message with the weight of decades of controversy.”

The WaPo does correctly note that in many ways the race already appears to be “teed up as a referendum on the two candidates’ pasts – both of whom carry enough baggage to fill many books – rather than their visions for the country’s future.”

“Clinton has increasingly directed fire at Trump’s long history of derogatory statements about women, his bankruptcies and other controversies to argue he is unfit for office.”

Trump, meanwhile, has sought to brand the former secretary of state as “Crooked Hillary,” pointing to such issues as the Whitewater real estate controversy in the 1990s and foreign donations to her family’s philanthropic organization over the past decade. Trump also regularly accuses the Clintons of hypocrisy on women’s issues and argues that Hillary Clinton has been an “enabler” of her husband’s actions and attempting to discredit the women in question.

That is how the topic of Vince Foster emerged: according to the WaPo, “Trump said another topic of potential concern is the suicide of former White House aide Vincent Foster, which remains the focus of intense and far-fetched conspiracy theories on the Internet.”

Conspiracy theory or not, the issue of Foster’s death may just hit a live nerve in the Clinton campaign, something that is the ultimate goal of Trump.

One issue on Trump’s radar is the 1993 death of Foster, which has been ruled a suicide by law enforcement officials and a subsequent federal investigation. But some voices on the far right have long argued that the Clintons may have been involved in a conspiracy that led to Foster’s death.

“He had intimate knowledge of what was going on,” Trump said, speaking of Foster’s relationship with the Clintons at the time. “He knew everything that was going on, and then all of a sudden he committed suicide.”

He added, “I don’t bring [Foster’s death] up because I don’t know enough to really discuss it. I will say there are people who continue to bring it up because they think it was absolutely a murder. I don’t do that because I don’t think it’s fair.”

He has now, and we can only expect the topic of Clinton’s alleged rape as well as the Clintons’ involvement in Vince Foster’ death to become an increasingly prevalent, if circuitous, theme of future Trump attack campaigns, even if as he says he “doesn’t bring it up”, because the purpose is simple: to throw Hillary and her campaign off balance.

Finally, since as the WaPo puts it, the presidential race is a “referendum on the candidates’ past“, the one candidate who comes up with the most shocking – and thus most memorable, remarkable and entertaining – skeletons in the closet will likely win. For now Trump appears to be holding the advantage, especially since nothing Hillary has come up with has managed to penetrate Teflon Trump’s thick skin so far.