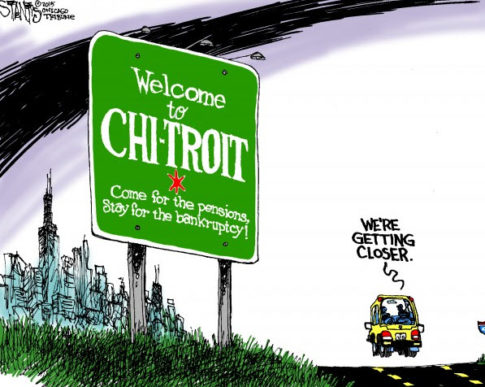 Mayor Rahm Emanuel has hopes pinned on union concessions and help from the state legislature. Neither is likely.

Out of Money in 10 Years

Thanks to the defeat of the city’s retirement-fund overhaul by the Illinois Supreme Court and new accounting rules, Chicago’s so-called net pension liability to its Municipal Employees’ Annuity and Benefit Fund soared to $18.6 billion by the end of 2015 from $7.1 billion a year earlier, according to an annual report presented to the fund’s board on Thursday. The fund serves some 70,000 workers and retirees.

Decisions that are now adding hundreds of millions of dollars to its annual bills have left Chicago with a lower credit rating than any big U.S. city but once-bankrupt Detroit.

The latest estimate for the municipal fund, one of Chicago’s four pensions, will add to what had been an unfunded liability estimated at $20 billion.

A key driver was the court ruling striking down Mayor Rahm Emanuel’s plan that cut benefits and boosted city and employee contributions. Without it in place, the fund is now set to run out of money within 10 years.

That triggered another change. New accounting rules, adopted to keep governments from using overly optimistic investment-return forecasts to mask the scale of their liabilities, require them to use more modest assumptions once pension plans go broke. As a result, the reported liabilities jump.

Under the traditional way of estimating the municipal fund’s obligations, which is how annual contributions are set, the shortfall rose to $9.9 billion as of Dec. 31, based on market value of its assets, according to the actuaries report. That’s up from $7.1 billion a year earlier. The pension is only 32 percent funded — meaning it has 32 cents for every dollar it owes — compared to 42 percent last year, according to the actuaries.

Emanuel claims to have “very good discussions” with the unions. That means one of two things.

In retrospect, those are the same thing.

Meanwhile, Jim Mohler, executive director of the fund, told board members on Thursday that it’s a “fluid situation.”

Mohler cited pending legislation in the Illinois legislature to bail out Chicago.

The only thing fluid is the exact timing of the bill followed by Governor Bruce Rauner’s immediate veto.

The Democrat controlled legislature has a super-majority that could in theory override Rauner’s veto. However, the legislature could have passed anything they wanted all year long. Yet, Illinois still does not have a budget.

In practice, there are a few “blue dog Democrats” that have a bit of fiscal sense.

And in this case, add in a bunch of downstate legislators who won’t relish hiking taxes to bail out bankrupt Chicago pensions. 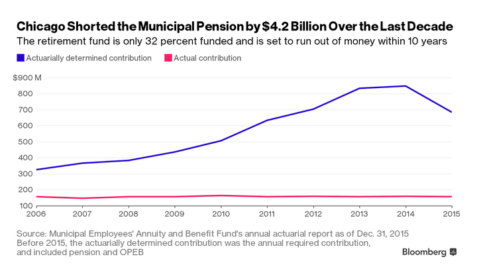 Will downstate legislators and “blue dog” Democrats vote to bail out that mess?

It’s possible, but color me skeptical. Is Emanuel going to get union concession?

That idea sounds even sillier.

The Chicago pensions are 32% funded despite the biggest bull market in history. What happens if the market has negative returns for even a few years?

The answer is the pension plans will go bust before 10 years pass.

The sorry state of affairs is stock and bonds have such lofty valuations that negative returns are likely not for a few years, bit seven to ten years.

“One Big Worldwide Bubble”: Cusp of 30-Year Bear Market in Stocks and Bonds

I side with Milton Berg, founder and CEO of MB advisors says “One Big Worldwide Bubble”: Cusp of 30-Year Bear Market in Stocks and Bonds. 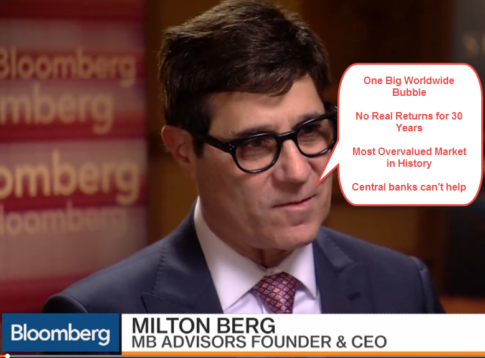 Please click on the above link for a fantastic interview with Berg.

Tax Hikes Not the Solution

The pension mess and the Chicago public school mess cannot be placed on the backs of Illinois taxpayer.

Mayor Emanuel already passed the biggest tax hike in history. Here are some links for discussion:

If Mayor Emanuel really wanted to do something for the city and city taxpayers, he would be begging House Speaker Michael Madigan for the one and only thing that can help the city: legislation that would allow Illinois municipal bankruptcies.

Let’s stop pretending there is another solution, because there isn’t.