After a month-long scare campaign waged by Saudi Arabia, and in no small part the Obama administration, which went so far as to threaten it would dump its US Treasurys (which the NYT previously had quantified as $750 billion however which the Treasury just yesterday disclosed for the first time in 41 years as only $117 billion, suggesting the Saudis would likely also have to sell US stocks and various other US-denominated assets), if the US were to pass a bill that would hold it legally liable for the Sept 11 attacks, it will be up to Obama to veto the bill because moments ago the Senate unanimously passed said bill, bringing Congress closer to a showdown with the White House.

The Senate’s passage of the bill, which will now be taken up in the House, is another sign of escalating tensions in a relationship between the United States and Saudi Arabia that once received little scrutiny from lawmakers.

As reported a month ago, the Obama administration has urgently lobbied against the bill, and the Saudi government has warned that if the legislation passes it might begin liquidating its USD reserves. Adel al-Jubeir, the Saudi foreign minister, delivered the warning to lawmakers and administration officials while in Washington in March.

Many economists are skeptical that the Saudis would deliver on such a warning, saying that the sell-off would be hard to execute and would do more harm to the kingdom’s economy than to America’s.

As the NYT reports, questions about the role Saudi officials might have played in the terror plot have lingered for more than a decade, and families of the Sept. 11 victims have used various lawsuits to try to hold members of the Saudi royal family and charities liable for what they allege is financial support for terrorism. But these moves have been mostly blocked, in part because of a 1976 law that gives foreign nations some immunity from suits in American courts.

But the Senate bill carves out an exception to the law if foreign countries are found culpable for terrorist attacks that kill American citizens inside the United States. If the bill were to pass both houses of Congress and be signed by the president, it could clear a path for the role of the Saudi government to be examined in the Sept. 11 lawsuits.

The administration has warned that any weakening of the sovereign immunity law could put American troops, civilians and corporations at legal risk if other nations decide to retaliate with their own legislation. Josh Earnest, a White House spokesman, said last month that President Obama would veto the bill if it reached his desk in its current form.

Earnest repeated the same warning moments ago, which means that if the House endorses the Senate bill, Obama will be put in the unpleasant spot of having to veto a bill which to many Americans is a critical milestone in figuring out if Saudi Arabia was indeed behind the September 11 bombings, and further lead to questions why Obama is defending a Wahhabist regime which has been repeatedly implicated in the biggest terrorist attack on US soil, and flagrantly rejecting to follow the will of the US electorate. 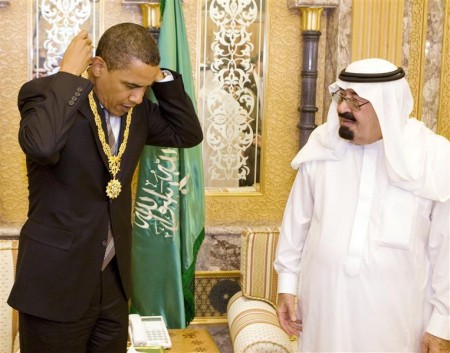