– THIS IS WHY WE ARE BRINGING “FREEDOM” TO THE MIDDLE EAST:

I can’t figure out why we are so concerned about the Middle East. Can you?

If we are swimming in shale oil and our future is driver-less electric cars, why are we so concerned about the Middle East?

After 15 years in Afghanistan, the opium crop is at record high levels. How could that be? I thought we were there to modernize and democratize their country. At least heroine in the U.S. is now cheaper than a happy meal at McDonalds. 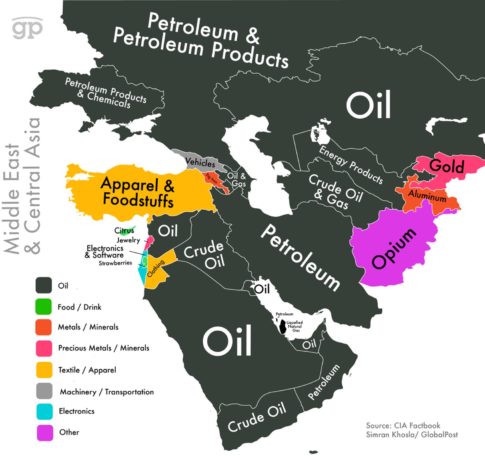 We’ll start with the obvious: the number one export for many countries here is crude oil or related petroleum products. Middle Eastern countries made up a significant portion of global oil export revenues during 2015 with shipments valued at $325 billion or 41.3% of global crude oil exports.Saudi Arabia, Iraq, United Arab Emirates, Kuwait, Iran, and Oman were all among the top 15 exporters of crude oil in 2015. Russia and Kazakhstan, countries on the Central Asian part of the map, were also members of that same group.

Regimes in the region found that there were many other corollary benefits from this economic might. Unrest could be stifled by rising wealth, and these countries would also have more influence than they otherwise would in global affairs. Saudi Arabia is a good example in both cases, though a major driver of Saudi influence has been slipping in recent years.

Aside from exports of oil, there are some other interesting subtleties to this map. One of the most advanced economies in the region, Israel, is not dependent on oil exports at all. The country has had to find other ways to create value in the global market and its three major exports include electronics and software, cut diamonds, and pharmaceuticals.

War-torn Afghanistan, which is not a significant producer of petroleum on the world market, gets the majority of its export revenue from different natural resource. Opium is Afghanistan’s most valuable cash crop, and opiates such as opium, morphine, and heroin are its largest export. Fetching an estimated value of $3 billion at border prices, it was estimated to make up about 15% of the country’s GDP equivalent in 2013.

Lastly, countries on the map without oil wealth tend to be less influential on the world stage from a geopolitical perspective. Armenia, for example, mainly exports pig iron, unwrought copper, and nonferrous metals and is the world’s 138th largest exporter by dollar value, ranked in between Jamaica and Swaziland. Surrounded geographically by countries that Yerevan considers hostile, Armenia has increasingly turned to Russia for its support.