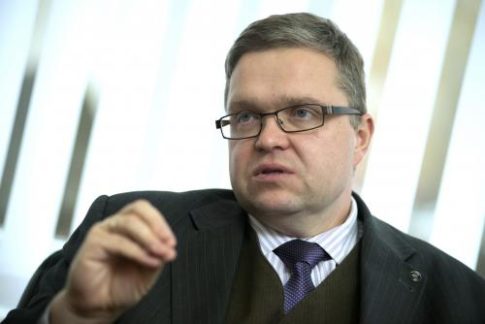 – A Central Banker Officially Loses It: “We Are Magic People”:

Over the years, first on fringe blogs who dared to point out long ago that the emperors are actually naked, and increasingly everywhere else there has been speculation that locked deep inside the ivory towers of central banks one could find either career academics or Goldman Sachs alumni who were convinced they were all powerful, all capable deities, who in addition to printing money out of thin air, are comfortable micromanaging not only the world’s capital markets but also economies. Just like gods, or “magicians”… but really just insane nutjobs.

Today we got an official confirmation of just how truly profound the central banker delusion of grandeur, and sheer insanity, is courtesy of ECB Governing Council member Vitas Vasiliauskas, who told Bloomberg in an interview that the ECB can still conjure up policy surprises – read inflation – if needed to combat economic shocks and push prices higher. While this was merely the usual jawboning by an ECB member, we bolded the word “conjure” for a reason. It will become clear why soon enough.

What followed was the usual verbal diarrhea we have grown accustomed from every central banker, whose first (and only) job is to preserve confidence in a broken system; so broken that even ordinary people are saving instead of spending despite negative rates.

The 42-year-old Vasiliauskas, who was appointed to a second term on April 7, declined to comment on specific policy options the ECB will take, but refuted the notion that the central bank wouldn’t be able to react to shocks such as a sudden worsening in the international economy.  “Such conversations, such speculations are taking place before every meeting,” he said. “We still have a lot of tools and we can make surprises for the market. I don’t see for the moment any need for a new rabbit because we should implement what was agreed, what was announced.”

Conversations about helicopter money for example, which is coming. Soon.

The ECB central banker then proceeded to get aroused by liquidity injections.

The Lithuanian governor singled out a second round of targeted long-term loans to banks as the most powerful addition to the ECB’s palette. The so-called TLTRO-II potentially offers to pay lenders to take central bank cash, the idea being that they pass it on to companies and households as loans. The first operation is scheduled for June 24.

“This measure, personally for me, is very sexy,” Vasiliauskas said. “It can make direct impact on the real economy.”

Sure: 5,000,000 unemployed European youths will become instatnly employed the moment the ECB’s “sexy” TLTRO-II is activated. Well maybe not, but at least the Stoxx600 should soar for at least 10%. That “economy.”

He also made it clear that the end of cash is indeed coming:

Vasiliauskas also backed the ECB’s decision this month to stop production of the 500-euro banknote. The measure was taken because of the note’s perceived role in crime, though it drew criticism in countries such as Germany and Austria.

“I think modern societies shouldn’t concentrate on cash — alternative ways of payment are more effective,” he said. “Personally, I was supportive. Less cash in a society is better and safer for everybody.”

Despite all these clear hints, many will be shocked when central banks finally outlaw all physical cash one day.

Still, the portly central banker’s punchline was the following:

“Markets say the ECB is done, their box is empty,” Vasiliauskas, who heads Lithuania’s central bank. “But we are magic people. Each time we take something and give to the markets — a rabbit out of the hat.“

What is most disturbing is that he was dead serious when he said it, which is important, because it is finally obvious that central bankers are neither gods, nor magicians, nor even doing “god’s work on earth”, but plain and simple psychopaths. At least the magician he was right about one thing: “we give to the markets.“