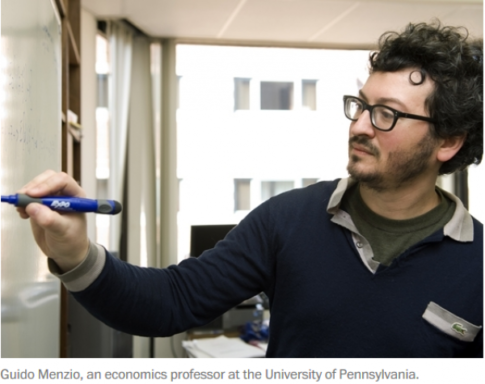 – Ivy League Professor Suspected Of Terrorism For Doing Math On A Plane:

Last week, American Airlines flight 3950 sat on the tarmac in Philadelphia waiting to take off for a quick flight to Syracuse. Seated together were two people who didn’t know each other; a 40 year-old man with dark, curly hair and foreign accent, and a blonde haired thirty-something woman.

The woman looked on as the man scribbled some foreign type symbols in a notepad with intense focus, and when the woman asked whether or not Syracuse was home for him, the man replied with a simple “no.” These two elements were enough to make the woman uncomfortable enough to pass a note to a crew-member that allegedly said she wasn’t feeling well. After a period of time went by, the crew-member asked the woman if she was still sick, to which the woman replied that she was OK to fly. However, the plane turned around anyway, making its way back to the gate, where the woman would eventually be taken off the plane.

As the plane continued to sit, a crew-member gave some intermittent excuses over the intercom as to why the plane hadn’t pushed back again. After another period of time with still no movement, the pilot made his way back to the man’s seat and ended up escorting him off the plane as well. The man was ultimately led to an agent, who started out the conversation by asking what the man knew about his seatmate on the flight. The man was under the impression that perhaps the agent was trying to figure out what was wrong with the woman, so he replied that she had acted a bit funny, but didn’t really seem visibly ill.

That’s where the story turns for the man, as the agent finally admitted to him the real reason he was escorted off the plane and was now answering the agent’s questions: he was suspected of terrorism.

All the man could do was laugh, as he pointed out the fact that those foreign symbols in his notepad were not part of any cryptic note, rather it was a differential equation. The man was literally suspected of terrorism for just doing math.

Had the airline bothered to do a quick check of its numbers prone passenger, it would have found that the man’s name is Guido Menzio, an Ivy League economist from the UPenn. Menzio was on his way to give a talk at Queen’s University on a working paper he co-authored about menu costs and price dispersion. The confused blonde who sat next to him on the plane was ultimately concerned with his tweaking of a price-setting model that he was about to present.

The professor showed the authorities his calculations and was allowed to return to his seat. The flight soon departed, without the blonde woman.

Menzio said that he was “treated respectfully throughout” the ordeal. Casey Norton, a spokesman for American Airlines said the woman did initially indicate that she was sick, but when she deplaned she disclosed the real reason she was getting off the plane.

Norton said that passengers raise similar suspicions that turn out to be unfounded “from time to time”, but wouldn’t elaborate any further.

Menzio said that he was troubled by the ignorance of the woman, and was frustrated by a “broken system that does not collect information efficiently”, and “a security protocol that is too rigid, in the sense that once the whistle is blown everything stops without checks, and relies on the input of people who may be completely clueless.”

“I thought they were trying to get clues about her illness,” he told The Associated Press in an email. “Instead, they tell me that the woman was concerned that I was a terrorist because I was writing strange things on a pad of paper.”

We suspect that if the professor had just purchased a copy of ‘Us Weekly’ from Hudson News prior to boarding the plane, he and the woman would have ended up being great friends. And while we’re not sure Trump is to blame for people’s sheer stupidity, we are sure that landing on a terrorist list for working out mathematical formulas is a bad sign for the health of a nation.