– “Out Of Control” Canada Wildfire Could Double In Size Today: Fort McKay Evacuated:

Since we first reported on the massive fire (and the fallout) that was burning in Canada’s oil sands gateway, Fort McMurray, things have gone from bad to worse. Today we learn that the fire that has already devastated 600 square miles, growing an additional 50% in less than 24 hours, is out of control, and could double in size by the end of the day. 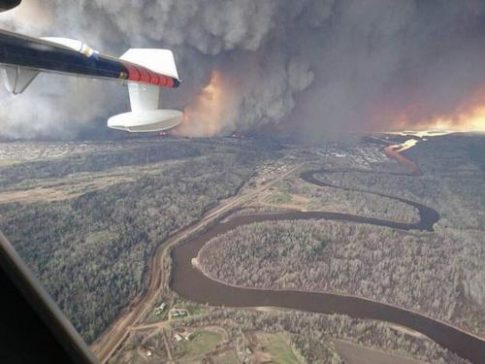 As of late Saturday night, the fire had grown to 156,000 hectares and was heading toward the Saskatchewan border. Officials said winds up to 40 kilometres an hour will blow Saturday and warm temperatures mean it could add another 100,000 hectares to the fire by the end of the day. “We need heavy rain,” said Chad Morrison, senior wildfire manager, giving an update with Notley at noon Saturday according to the EdJournal.

“This remains a big, out of control, dangerous fire” Public Safety Minister Ralph Goodale said. “There is one prediction, that if it continues to grow a the present pace, it could double today” Goodale added. 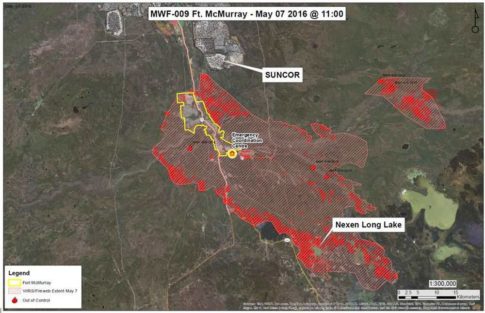 The map above shows the fire as of 11 a.m. Saturday. The smaller fire in the northeast corner of the map is expected to join the major fire today and continue growing. There are serious concerns it will reach the Saskatchewan border

Alberta’s government crisis cell warned that the fire conditions remained extreme in the province due to low humidity, high temperatures, and gusty winds.

“It looks like the weather in and around Fort McMurray will still be, sadly, very conducive to serious burning conditions. The situation remains unpredictable and dangerous.” Goodale continued.

People that fled to the north of the city are now being evacuated again due to changing wind conditions. The plan now is to move people south to other evacuee staging grounds, and eventually to Edmonton, 250 miles to the south.

Meanwhile, oil producers continue to hunker down, and earlier today Syncrude said it would shut its Mildred Lake units, shortly after Huksy said it would shut down its sunrise oil sands complex completely.  Suncor started a voluntary evacuation of non-essential personal as the fire burns close.

And as the raging fire spreads, the latest update is that the neighboring northern town of Fort McKay has also been put under a voluntary evacuation order, Premier Rachel Notley announced Saturday morning as the Fort McMurray fire continued to grow and move to the northeast.

Finally, for those who haven’t seen the stunning dashcam footage from Alberta’s burning oil sands, or the timelapse video of a burning house as watched by its owner, here are some more recent images of Alberta’s out of control inferno:

Used by many and loved by few, Fort McMurray deserves only our support https://t.co/UKkImGihJj via @garymasonglobepic.twitter.com/7J7642KbMw

Canadian officials continue to transport residents of wildfire-ravaged Fort McMurray out of the area: https://t.co/5LOwyFK7dM

So what happened to Canada’s Fort McMurray after the wildfire? pic.twitter.com/vw1Bby5Fy7

How Fort McMurray plans to rebuild after the wildfire: ‘It will stand again’ https://t.co/KYuq8wbNNMpic.twitter.com/QdnR85rrBy

Canada wildfire has ballooned to 100,000 hectares in #FortMcMurray, now billowing across a wide front south of city pic.twitter.com/NAN4aw1Gyu

A disastrous wildfire has forced more than 80,000 residents to evacuate Fort McMurray https://t.co/5Xvq9kwDvFpic.twitter.com/2nP7ddhFOI