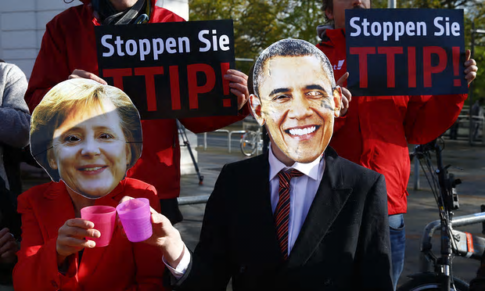 Following this weekend’s leak by Greenpeace demonstrating not only that the TTIP is driven entirely by narrow corporate interests, but that Obama is openly willing to reneg on his pro-environment agenda just to pass the Transatlantic Treaty at any cost, the blowback arrived earlier today when France became the first major European nation which threatened to reject the huge free trade deal between the U.S. and the European Union, because according to AP “it’s too friendly to U.S. business and probably doomed.“

French president Francois Hollande said Tuesday that France “will never accept” challenges to its farming and culture in exchange for better access to U.S. markets. “That’s why at this stage, France says no,” the Socialist leader said at a conference on left-wing politics.

Earlier Tuesday, French Trade Minister Matthias Fekl told Europe-1 radio that negotiations “are totally blocked” and that a halt to talks “is the most probable option.” He insisted on better farming and environmental protections, adding that “in its current state, France cannot sign it.”

“Europe is giving a lot … but receiving very little in return,” he said.

In an unexpected twist to what was supposed to be a smoothly implemented treaty, European officials appear to be toughening their rhetoric after Greenpeace leaked large amounts of confidential negotiating documents that suggest the EU is coming under U.S. pressure to weaken consumer protections in key sectors.

France and some other European countries with rich culinary and farming traditions are particularly concerned about U.S. policies that give greater freedom to trade in genetically modified food, chlorine-rinsed poultry and hormone-treated beef.

France is also protective of subsidies to its film industry, fearing eventual domination by deep-pocketed Hollywood.

Meanwhile, as reported previously, support for the TTIP has tumbled on both sides of the Atlantic, with just 15% of Americans and 17% of Germans now responding that the trade deal would be beneficial, down from more than half as of two years ago.