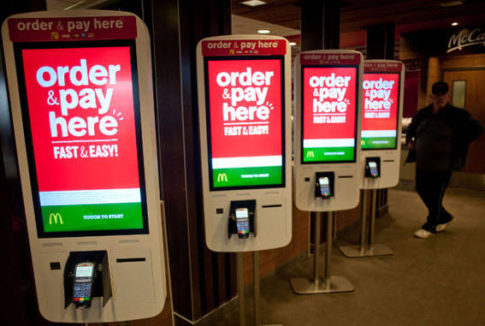 While this should be no surprise to any rational non-establishment-teet-suckling economist, former McDonalds’ CEO Ed Rensi exclaims, in a recent Forbes Op-Ed, that “a $15 minimum wage won’t spell the end of [fast-food brands]. However it will mean wiping out thousands of entry-level opportunities for people without many other options.” The $15 minimum wage demand, which translates to $30,000 a year for a full-time employee, is built upon a fundamental misunderstanding of a restaurant business (and we add simple supply and demand fundamentals) – just “do the math” Rensi rants…

“They’re making millions while millions can’t pay their bills,” argue the union groups, suggesting there’s plenty of profit left over in corporate coffers to fund a massive pay increase at the bottom.

In truth, nearly 90% of McDonald’s locations are independently-owned by franchisees who aren’t making “millions” in profit. Rather, they keep roughly six cents of each sales dollar after paying for food, staff costs, rent and other expenses.

Let’s do the math: A typical franchisee sells about $2.6 million worth of burgers, fries, shakes and Happy Meals each year, leaving them with $156,000 in profit. If that franchisee has 15 part-time employees on staff earning minimum wage, a $15 hourly pay requirement eats up three-quarters of their profitability. (In reality, the costs will be much higher, as the company will have to fund raises further up the pay scale.) For some locations, a $15 minimum wage wipes out their entire profit.

Recouping those costs isn’t as simple as raising prices. If it were easy to add big price increases to a meal, it would have already been done without a wage hike to trigger it. In the real world, our industry customers are notoriously sensitive to price increases. (If you’re a McDonald’s regular, there’s a reason you gravitate towards an extra-value meal or the dollar menu.)

Instead, franchisees can absorb the cost with a change that customers don’t mind: The substitution of a self-service computer kiosk for a a full-service employee.

They’re unlikely to succeed in their goal of organizing the employees of McDonald’s franchisees, but they may well succeed in passing $15 into law in other sympathetic locales.

You’ll see their legacy every time you visit the Golden Arches, where “would you like fries with that” is a button on a computer screen rather than a phrase spoken by an employee in their first job.