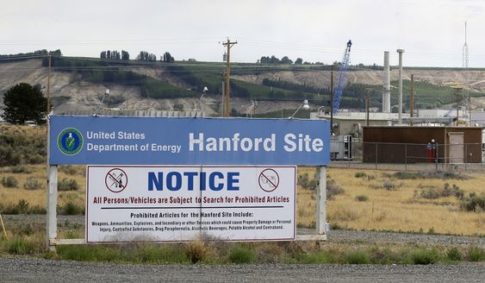 A video inspection of the underground tank found no evidence that radioactive waste had leaked from the primary tank into the space between the two walls, Hanford officials said. While a new leak is a possibility, they have found no evidence of one.

“We want to discredit that potential before we make any statement,” said Tom Fletcher, the U.S. Department of Energy’s tank farms manager at Hanford.

A Hanford watchdog group on Tuesday contended the higher radiation found by the air monitors was evidence of a leak in a second tank. Hanford Challenge is based in Seattle.

Earlier this month, Hanford officials revealed that a tank known as AY-102 had leaked several thousand gallons of radioactive waste from its primary tank into the annulus.

It was the first of the 28 double-walled tanks at Hanford to be found to have leaked. That waste is being pumped back into the primary tank.

The sprawling Hanford site is located near Richland, Washington, and was constructed during World War II to make plutonium, a key ingredient in nuclear weapons. The site is now engaged in cleaning up the leftover waste at a cost of more than $2 billion per year.

The most dangerous wastes are stored in 177 underground tanks, most of them old, single-walled tanks, some of which have leaked. The double-walled tanks were presumed to be much safer.

“In light of today’s developments, I will also be asking the U.S. Government Accountability Office to examine what and when DOE knew about the leaks in these tanks, the adequacy of the department’s tank safety efforts and responses to the deteriorating condition of all of the high-level waste tanks,” Wyden said.

Fletcher, in a telephone interview with The Associated Press, said air samples checked on April 6 and April 14 showed some elevated levels of radioactivity within the annulus of tank AY-101, which is more than 40 years old and contains about 578,000 gallons of waste.

They did a video inspection of the annulus and found no evidence of a leak, Fletcher said.

“There are a number of potential sources this could come from,” Fletcher said, including a leak that might have so far escaped detection.

Fletcher said Hanford officials will continue to study the problem, but he could offer no deadline for solving the riddle.

The possible failure of a second double-shell tank at Hanford is serious because Hanford is running out of space to store waste from leaking tanks, said Tom Carpenter, director of Hanford Challenge.

“There is no other realistic option but to begin building new tanks immediately,” Carpenter said. Those tanks would take several years to build, the group said.

Hanford stores about two-thirds of the nation’s high-level nuclear waste, Hanford Challenge said. Dealing with that waste is expected to take decades and cost billions of dollars.