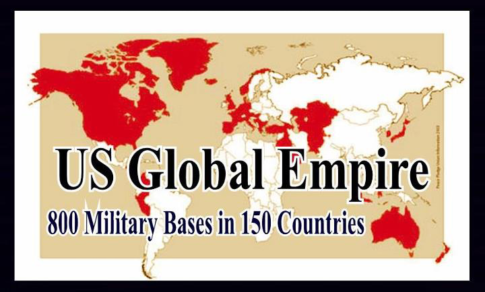 Economic Subversion and Financial Terrorism, Monetary Collapse and Corporate Sabotage are the Main Tools by which the Anglo-American Empire Maintains Its Ascendancy

This is how the United States of America continues to run its tyranny around the world. Because the U.S. Armed Forces are now spread so thin as the global Anglo-American Empire starts to collapse, the USA has no alternative but to wage financial and legal wars against all of its perceived enemies.   Those fabricated enemies all have one thing in common—money and resources. It is the same criminal NWO cabal that controls the U.S. Federal Government which has relentlessly targeted these resource-rich and currency-wealthy adversaries.

EXPOSED: Covert Scheme to Invade 7 Countries in the Mideast by the U.S. Military and its Proxies (ISIS)

In the case of Iran, the current government there especially poses a formidable countervailing force to the covert Zio-Anglo-American scheme known as the Greater Israel Project.  Because Iran will not be muzzled where it concerns this plot to completely take over the entire Middle East by the Anglo-American Axis* (AAA), they have been unrelentingly targeted by TPTB.  In these days of incessant and fierce resource wars jumping off all over the planet, the Mideast remains a prized possession due to its strategic geopolitical importance, and particularly for its oil and gas reserves.

The following NYT article posted below in its entirety is a perfect example of the USA implementing its infamous brand of despotic justice within the community of nations. The American court system has become so arrogant that hand-chosen judges well known for their hubris are now routinely used to issue unilateral and summary judgments against falsely accused ‘defendants’ who have had no opportunity to even defend themselves.  As follows:

This tactic of the Anglo-American Empire is merely a symptom of its fast and furious downfall.  So desperate is the economic condition and financial status of Corporate America that it has conscripted the U.S. military to prosecute wars wherever new territory can be seized, natural resources can be stolen, industrial base can be plundered and pillaged, and a labor force can be enslaved.  The cabal’s ultimate goal is, of course, to completely control the biosphere, weather and resources alike.

This imperial strategy was used quite effectively by the Roman Empire of which the AAA is an extension of.  The familiar tactics of warmongering via false flag operations, naked acts of government-sponsored terrorism, and the inciting of color revolutions and civil wars are each indicative signatures of the cabal’s MO.  So, too, is the predictable use of disaster capitalism, race-specific bio-weaponry, weather warfare and space-based weaponry. However, it is the cabal’s stealthy employment of economic subversion and financial terrorism, monetary collapse and corporate sabotage that they have effectively used to soften up any prey they intend to attack.  But first they always put into place the totalitarian bills and exploitative legislation, oppressive laws and repressive statutes, arbitrary rules and unreasonable regulations which confer the veneer of legitimacy on their patently unlawful endeavors.

There is no longer any question about the ultimate goal of these NWO strategies.  The ruling elites of the cabal have frequently gone public with their implicit intentions and stated objectives in the pursuit of their various global conquests.  Clearly, the total domination of the planetary civilization remains their elusive ambition … as it is quite likely to be for years to come.

The Anglo-American Empire is now in its death throes having been on serious life support since September 11, 2001.  That U.S. government-sponsored false flag terror operation on 9/11 was in fact executed in order to prolong the life of a dying empire.  For those AAA-coordinated terrorist attacks were designed to permit a uniquely branded USA fascist corporatocracy to take complete control of the American Republic.  And so it has.

The Government-Corporate Complex Takes Complete Control Of The USA

Now the NWO agenda calls for a full-blown One World Government operating under the rubric of the totally corrupt United Nations.  Both Agenda 21 and the 2030 Agenda for Sustainable Development are being foisted on the international community as a means to shoehorn this misguided conspiracy to rule the world by the clandestine psychopathocracry.

An Abridged History Of The United States Psychopathocracy

All Roads Lead to Armageddon

The Final Steps Towards Armageddon

The Anglo-American Axis is represented, first and foremost, by the major English-speaking countries of the world: USA, UK, Canada, Australia, New Zealand and Israel. The European member nations of NATO, such as Germany, France, Italy, Spain, Portugal, Belgium, Luxembourg and the Netherlands are also closely aligned with the AAA as are all the Scandinavian countries. So are the Asian Pacific Rim nations of Japan, South Korea, Taiwan and the Philippines. Saudi Arabia, Egypt, Pakistan, Kuwait, Jordan, Bahrain, United Arab Emirates, and Qatar also owe their allegiance to the AAA but some of these may be changing. The World Shadow Government is an ultra-secret, supranational organization which completely controls the Anglo-American Axis, as well as the European Union, NATO, among many other institutional entities which constitute theGlobal Control Matrix.
(Source: Vladimir Putin’s Russia: Perfect Foil To The Anglo-American Axis And Their New World ‘Order’)

Iran said on Monday that it would seek to sue the United States at theInternational Court of Justice at The Hague to prevent the distribution of nearly $2 billion in impounded assets from Iran’s central bank to compensate American victims of overseas attacks.

Distribution of the impounded assets, which the United States Supreme Court validated in a decision last week, has enraged the Iranians and threatened to damage the improvement in relations created by the deal reached last July on Iran’s nuclear activities.

The Supreme Court decision affected more than 1,000 Americans — survivors of, and relatives of people killed in, attacks that the American authorities have attributed to Iranian operatives.

The Iranians have denied responsibility for these attacks and have accused the United States of using them as an excuse to steal their money through the Supreme Court decision.

“We hold the U.S. administration responsible for preservation of Iranian funds, and if they are plundered, we will lodge a complaint with the I.C.J. for reparation,” Iran’s foreign minister, Mohammad Javad Zarif, told reporters on Monday in Tehran. He was referring to the International Court of Justice.

But lawyers said it was unclear whether the court’s jurisdiction would be accepted in such a case.

The United States withdrew its general acceptance of the court’s jurisdiction after losing a landmark case to Nicaragua in 1986 over American intervention in that country.

Lawyers said the court might be able to hear some disputes between Iran and the United States because of their 1955 Treaty of Amity, Economic Relations and Consular Rights, which provided for the court to have jurisdiction.

Others said Iran might have already factored in a negative outcome over the Supreme Court ruling and would continue to protest, but almost certainly would not let the ruling sabotage the far broader nuclear deal, which unfroze billions of dollars’ worth of Iranian money in other countries and terminated or eased a range of economic sanctions.

“The ruling will further chill Iran-U.S. relations, but Tehran still wins a ton from the deal and isn’t about to split,” said Cliff Kupchan, chairman of the Eurasia Group, a Washington-based political risk consulting firm.

1 thought on “US Empire Goes Berserk: Unleashes Legal Jackals On All Perceived Enemies For Financial Expropriation”