Those expecting a strong Spring start to housing (and you know who you are),  were miles off their forecast.

Both starts and permits were down steep percentages, both below the bottom ranges of economists’ estimates.

The Bloomberg Econoday consensus estimate for housing starts was 1.167 million homes SAAR (seasonally adjusted annualized) in a range of 1.120 million to 1.195 million.

The Bloomberg Econoday consensus estimate for housing permits was 1.200 million SAAR (seasonally adjusted annualized) in a range of 1.175 million to 1.231 million.

Data on the housing sector are slowing going into the key spring season. Housing starts fell a very sharp 8.8 percent in March to a 1.089 million annualized rate which is well below Econoday’s consensus for 1.167 million and below the low estimate for 1.120 million. Permits are showing similar weakness, down 7.7 percent at a 1.086 million rate which is likewise below both the consensus and low estimate.

Weakness in starts is split roughly evenly between single-family and multi-family components with weakness in permits concentrated in multi-families. Nevertheless, there is fundamental strength in the year-on-year rates, at plus 14.2 percent for starts and a less spectacular plus 4.6 percent for permits.

Housing starts & permits have swung sharply in recent reports including a big upswing for starts in February together with a big downswing for permits. Forecasters are calling for a reversal in March, a 0.9 percent dip for starts to a 1.167 million annualized pace and a 2.8 percent gain for permits to a 1.200 million rate. A gain for permits, especially one centered in single-family homes, could lift the outlook for what has been an underperforming housing sector.

Inquiring minds may be interested in exploring Bloomberg’s comment “Nevertheless, there is fundamental strength in the year-on-year rates, at plus 14.2 percent for starts and a less spectacular plus 4.6 percent for permits.”

I happen to have a series of pictures that adequately displays the “fundamental strength” that Bloomberg cites. 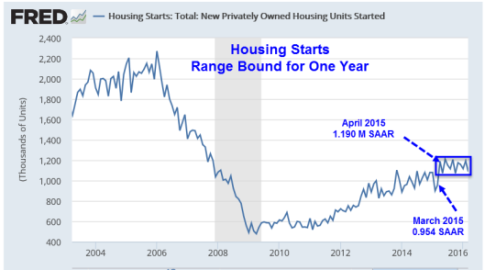 The fundamental strength of March 2016 vs. March 2015 is based on a lowball number last year that was then downplayed as “the weather”.

Based off that rationale, let’s look  ahead to see what is fundamentally on the horizon. 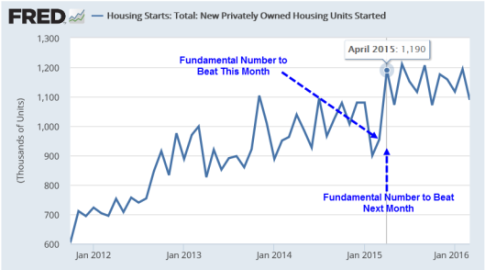 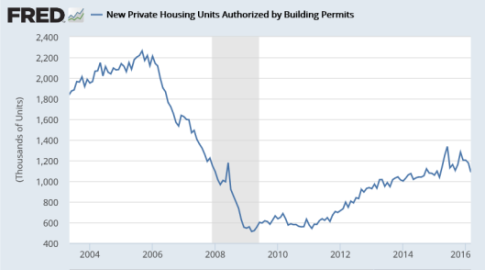 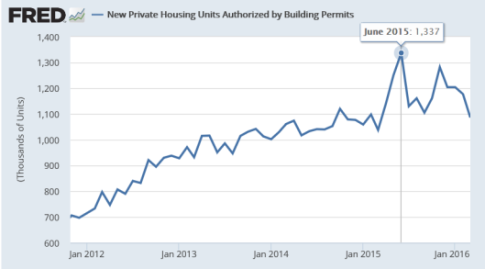