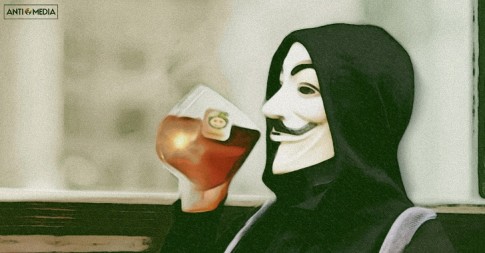 – Apparently Wearing an Anonymous Mask in America Can Get You Arrested:

(ANONHQ) A man in an Anonymous mask, who was sitting peacefully, was harangued by police and arrested. All caught on camera, bystanders recorded the event while a multitude of witnesses yelled out that he did nothing wrong or illegal. The incident took place in the House Gallery, during the Maricopa County hearing over the suspected election fraud.

Two officers attended the arrest of the man. Although the man in question didn’t have his face concealed by the mask—the mask had been resting on the top of his head—the first arresting officer approached from behind and kicked at him lightly until he left his chair.

Bystanders went to the man’s defense, with several phones filming the event. One bystander even said the arrest was made because the man was sporting an Anonymous mask.

In the video, another bystander accuses the police of choking the man as the officers unduly restrained him while he was quietly sitting between the chairs. Chants of “shame” and “the whole world is watching” were cried as the man was forced to his feet and escorted away.

After the removal of the man, one of the bystanders states: “you promised us if we were silent you wouldn’t remove us.” Officials then began to plead with the crowd. At the end of the video, one official agreed that the man with the mask did nothing wrong.Janet Higgens, who uploaded one of the videos, stated: “We were at the point of chaos. All brought on by the police. For a man sitting quietly. With dreadlocks. His name is Jonathan S. McRae. He is currently in jail, charged with trespassing and resisting arrest. I disagree. He was harassed, held to the floor for over 5 minutes, and kidnapped. I don’t know if he was injured in the attack.”

“We the people of the United States are tired of this stuff,” another witness yelled as a bystander warned that this would all end up on YouTube.

Arrested for wearing an Anonymous mask…

You can view the long version of the video here.