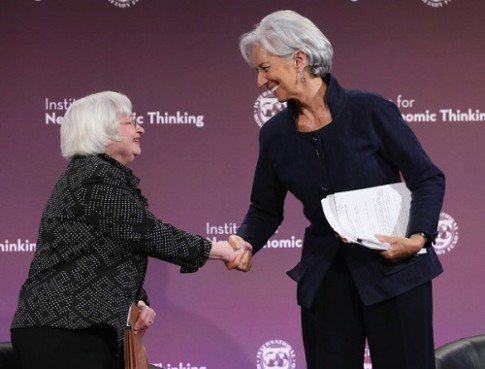 – Lost Faith In Central Banks And The Economic End Game:

We live in strange economic times, stranger perhaps than at any other point in history. Since 2007-2008, the globally intertwined and dependent fiscal system has suffered considerable declines in every conceivable area. Manufacturing around the world is in a slump, from Japan to China to Europe, with the minimal manufacturing accomplished in the U.S. also fading. Consumption is falling, most notably in petroleum and raw materials. Employment is truly dismal, with the U.S. posting over 94 million people as “non-participants” in the national work force.

High paying jobs are disappearing, and the only jobs replacing them are in the low wage service sector. This problem is becoming so pervasive that certain more socialist states including California and New York are attempting to offset the loss of sustainable income jobs by forcing retail and service companies into paying an inflated minimum wage. That is to say, states hope to stop the bloodletting in wages by magically turning low paying jobs into high paying jobs.

As anyone with any economic sense knows, you cannot have a faltering consumer sector in which people are buying less and force service based companies to pay their employees far more per hour than the job is worth. Those companies will simply lay off more employees, cut hours or shut down entire branches of their operations in order to maintain their profit margins. Either that, or those companies will go out of business.

One sector, though, has continued to reap certain benefits (for now), and that is equities. There is a good reason for this.

The stock market is a kind of Pavlovian control mechanism, a mental trigger in the minds of the masses that dominates their perceptions of the world’s financial health. The drooling public sees green lines and they hail impending “recovery;” they see red lines and suddenly they begin to wonder if all is not well. As the former head of the Federal Reserve Dallas branch, Richard Fisher admitted in an interview with CNBC, the U.S. central bank in particular has made its business the manipulation of the stock market to the upside since 2009:

“What the Fed did — and I was part of that group — is we front-loaded a tremendous market rally, starting in 2009.

It’s sort of what I call the “reverse Whimpy factor” — give me two hamburgers today for one tomorrow.

I’m not surprised that almost every index you can look at … was down significantly.” [Referring to the results in the stock market after the Fed raised rates in December.]

Fisher went on to hint at the impending danger:

I was warning my colleagues, “Don’t go wobbly if we have a 10-20% correction at some point…. Everybody you talk to … has been warning that these markets are heavily priced.”

Central banks have focused most of their efforts on levitating the Dow as well as energy markets for some time now.

Something has changed recently, though. Why, for example, did the Fed go against its long-time mandate of manipulating equities into positive territory by committing to the taper of QE3? Why did they then later commit to hiking interest rates, an action they KNEW would cause a massive downturn in stocks?

The jawboning of stocks in March back from the brink actually tells us a lot in terms of the central bank’s intentions. First, it tells us that the Fed does not intend to use tools such as rate cuts and stimulus measures to buy back market optimism. Rather, they are relying solely on investor faith that central banks are not going to leave them high and dry. They have decided to use manipulative language alone, rather than the manipulative monetary policy we have grown accustomed to.

Second, the action of the Fed in raising rates has torn away the veil and shown the public stocks truly cannot survive without central bank support. The moment the Fed leaves markets to their own devices, the only things left for investors to turn to are the fundamentals, and of course the fundamentals are ugly beyond belief. Thus, stocks begin to plummet.

As I point out in my article “Markets Ignore Fundamentals And Chase Headlines Because They Are Dying,” some of the greatest market rallies in U.S. history occurred during the onset of the Great Depression, and all of these rallies were based on a false sense of public faith that recovery was “right around the corner”. The rally this past March is no different. There are no fundamentals to back it, it was built entirely on faith, and soon it will implode as similar rallies did during the Depression.

Just in the past week alone, certain signs are bubbling to the surface to undermine the facade of the recent dubious rally.

For anyone who was betting on oil markets to continue their rally past the $40 per barrel mark, there was a lot of bad news. Saudi Arabia crushed optimism by announcing that it would not be entertaining a “production freeze” proposal unless ALL other oil producing nations, including Iran, also agreed to it.

Iran then doubly crushed optimism by announcing an increase in production rather than committing to a freeze.

Russia then administered the final blow by releasing data showing that their oil output had risen to historic levels, indicating that they will not be entering into any agreement on a production freeze.

Besides a recent overly optimistic (and rather suspicious inventory draw) which has caused a short term rebound, all indicators show that oil will be headed back to the lows seen at the beginning of this year.

Why do oil markets matter? Well, it would seem that stocks for the past few months have been loosely tracking oil. When oil has taken a dramatic turn to the negative, so have stocks. This may be a purely psychological correlation, but that is kind of the point. ALL stock market movements are purely psychological today, and when psychological optimism fails, the fundamentals strike hard. So far, oil is solidly back in volatile territory, and equities are following.

In fact, most of the world is beginning to feel tremors yet again in stocks as central bank meeting and announcements are having less and less affect on positive psychology.

Asian markets were trounced the past week with a return to volatility as Chinese and Japanese central banks were either unable or unwilling to slow the tide. European markets followed, with some market participants coming to terms with the nature of the recent rally:

“The market is missing confidence,” said Mathias Haege, who helps oversee 300 million euros ($342 million) as managing partner of MaxAlpha Asset Consultant in Frankfurt. “At the end of the day, it doesn’t matter what central banks are doing if economic growth doesn’t accelerate and corporate earnings continue to shrink.”

And there you have it. Stock markets are in no way a measure of economic health at this time, they are only a measure of investor confidence in central banks, and that confidence is failing in light of extremely negative fundamentals.

So, I ask again, why have many central banks and the Federal Reserve in particular pulled back from their usual tools (near zero rates and stimulus) at a time when investor faith in the economy is falling?

Recently, Wikileaks published a transcript of an internal International Monetary Fund (IMF) discussion that provides some answers. The general thrust of the document shows that the IMF deliberately set the stage for a return to instability in Greece this summer with the intention of destabilizing the EU, and more specifically cornering Germany. The goal? To essentially force the EU to allow the IMF to take a more commanding role in the economic affairs of the supranational body.

Far too much attention is paid to the criminality of national central banks like the Federal Reserve, but the Federal Reserve is nothing more than a franchise, an appendage of a greater banking syndicate with the IMF, Bank for International Settlements (BIS) and the World Bank leading the way.

What many people do not seem to understand is that national central banks are expendable in the minds of globalists like those at the IMF. They are nothing but institutions on paper. Their true assets are unknown because they have never been audited. They can be destroyed or absorbed on a whim if globalists see greater gains as a result. The Wikileaks documents support the assertions I wrote in my article, “The Economic End Game Explained,” that central banks, led by the IMF and the BIS, are deliberately creating instability in global markets in order to create a crisis large enough to substantiate total centralization of power in the hands of those same institutions.

This should not be news to anyone, but unfortunately it is. Back in 2012 IMF head Christine Lagarde made this revealing statement:

“When the world around the IMF goes downhill, we thrive. We become extremely active because we lend money, we earn interest and charges and all the rest of it, and the institution does well. When the world goes well and we’ve had years of growth, as was the case back in 2006 and 2007, the IMF doesn’t do so well both financially and otherwise.”

If the IMF is engineering a financial crisis in Europe in order to gain more power and influence, why wouldn’t the Fed be doing the same for the IMF in America?

The ONLY explanation that makes sense in terms of the Fed allowing an incremental removal of support from U.S. markets is that their GOAL is to create instability. The jawboning and exploitation of false hopes acts as a kind of steam valve, slowing the crash to a manageable pace.

The loss of faith in central banks and their ability to support dying markets is indeed occurring. However, this is not the whole story. The fact is, the loss of faith is MEANT to happen, and it is useful to globalists at the IMF who now seek to replace hundreds of central bank franchises across the globe with a single governing entity overseeing the financial administration of the entire world. That is to say, the IMF is creating the problem so that they can offer themselves and their authority as a solution.

Just as the international bankers use stimulus and rate policy as tools, so, to, do they use chaos.