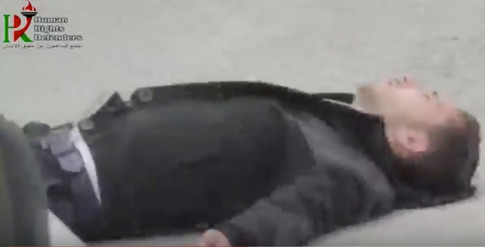 – Exclusive: Activist Who Filmed Execution of Dying Man by Israeli Soldier Speaks Out:

Palestine — An Israeli soldier has been arrested after video footage emerged of him shooting a Palestinian in the head while he was wounded and immobilised on the ground. The Israeli Defense Force (IDF) has opened an investigation into the assassination, which took place after two Palestinians were accused of carrying out a knife attack in the city of Hebron.

Ramzi al-Qasrawi and Abd al-Fatah al-Sharif, both 21, were shot on Thursday after stabbing a soldier in the Tel Rumeida area of Hebron. The soldier sustained medium-level injuries, al-Qasrawi died immediately, and al-Sharif fell wounded to the ground.

The damning video footage was captured by cameraman, Emad abu-Shamsiyeh and his wife, Fayzeh, from activist group Human Rights Defenders. The couple were having coffee in Tel Rumeida around 8:30am on Thursday when they heard shots. Taking their cameras, they rushed to the street to find out what was going on. Abu-Shamsiyeh’s footage shows al-Sharif lying on the road injured while Israeli soldiers and medics ignore him. No one attempts to give him first aid. Suddenly, the soldier aims his weapon and fires a single shot at point-blank range into al-Sharif’s head, killing him. This happens in plain view of the other soldiers, who don’t take any notice — despite blood pouring from his lifeless body.

As a form of popular resistance, non-violent activist group Human Rights Defenders have, for the last three years, used their cameras to document human rights abuses and international law violations occurring amid Israel’s military occupation of Palestine. Based in Hebron — a hotbed of friction due to the presence of radical Israeli settlers and military stationed there to ‘protect’ them — the group is made up of men, women, and children. The activists upload their videos to the group’s Youtube channel to expose the crimes committed against Palestinians as a result of Israel’s colonial enterprise.

“I witnessed a young boy who was bleeding from his forehead but he was still alive. As soldiers and settlers gathered, an Israeli ambulance came and took the injured soldier away. No one gave the Palestinian treatment who was laying on the ground. He was still alive and was moving his hand and leg. I was still filming while they put the soldier in the ambulance and saw another soldier get in a position to shoot. He shot one bullet towards the boy, directly in his head. Part of his brain came out on the ground because of the close distance. This is what me and my wife witnessed and filmed with our own eyes and through the lens of my camera.”

Asked what was different about Thursday’s shooting, Dwaik told Anti-Media in an interview:

“Yesterday was different because it was clear from the video that the soldier was in no danger from al-Sharif. The boy was already on the ground surrounded by army, medics and police. This shows what a moral army this is.”

Dwaik said that as a result of widespread media attention, Emad abu-Shamsiyeh is feeling at risk. Stones were thrown at the home on Friday and he is considering moving his family to safety for a while. Asked what would have happened if he and Fayzeh hadn’t been there to film the harrowing scenes, Dwaik was frank:

“No one would know this story and it would be handled by Israel like all the others. This proves the importance of the cameras Palestinians need to tell their stories and document what is going on. Otherwise you would only hear the Israeli side of the story — which is an occupation story.”