– Sanders Celebrates as GMO Labeling Dark Act is Blocked in US Senate:

U.S. Presidential Candidate Senator Bernie Sanders issued the following statement Wednesday after the U.S. Senate blocked the “New Dark Act”, by Kansas Senator Pat Roberts that would have stopped Vermont and other states from requiring labels on genetically modified foods: 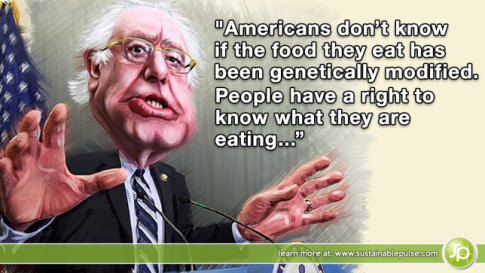 “I am pleased that Congress stood up to the demands of Monsanto and other multi-national food industry corporations and rejected this outrageous bill. Today’s vote was a victory for the American people over corporate interests.

“Sen. Roberts’ legislation violates the will of the people of Vermont and the United States who overwhelmingly believe that genetically modified food should be labeled. Republicans like to talk about states’ rights, but now they are attempting to preempt the laws of Vermont and other states that seek to label GMOs.

“All over this country, people are becoming more conscious about the food they eat and the food they serve their kids. When parents go to the store and purchase food for their children, they have a right to know what they are feeding them. GMO labeling exists in 64 other countries. There is no reason it can’t exist here.”

The New Dark Act was voted down on the Senate floor Wednesday by 49 No to 48 Yes (Monsanto needed 60 Yes votes to move it forward).

Bernie Sanders is the only mainstream U.S. Presidential candidate who has come out strongly in support of GMO labeling.

“Unlike people in the U.K., France, Germany, Italy, Ireland, Australia, South Korea, Japan, Brazil, China, Russia, New Zealand and other countries where labels are required, Americans don’t know if the food they eat has been genetically modified. People have a right to know what they are eating…”

“I think all over this country, people want to know the quality of the food they’re eating and what they’re giving to their kids is good quality. We just don’t know all that much about genetically modified food. . .”

“Monsanto and other companies are saying states can’t do it [label GMOs]. It is a federal prerogative. My amendment said if California, Vermont, Connecticut, other states want to go forward, they should have that right.”

“An overwhelming majority of Americans favor GMO labeling but virtually all of the major biotech and food corporations in the country oppose it…The people of Vermont and the people of America have a right to know what’s in the food that they eat.”