By Kevin Barrett with Hicham Hamza

Hamza’s “crime”: He revealed the Israeli origin of the famous macabre photo depicting victims’ bodies, some in seemingly impossible positions, strewn around the blood-smeared floor of the Bataclan nightclub. 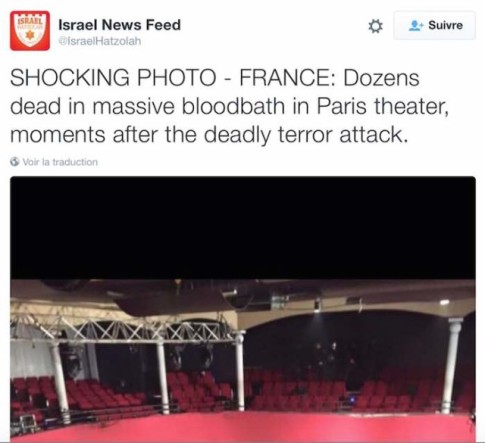 That photo, whose authenticity has been questioned in the alternative media, is the basis of David Dees’ collage on the front cover of ANOTHER French False Flag? Bloody Tracks from Paris to San Bernardino. 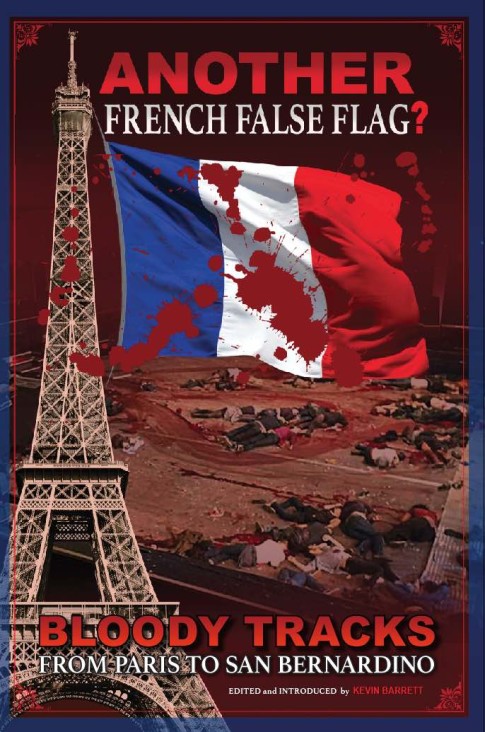 The arrest of Hicham Hamza exemplifies how the great French tradition of liberté has been crumpled up and tossed into the Seine in the wake of the 11/13 false flag.

The State of Emergency that followed the attack has been officially extended until May, without any evidence or reason given, and its term may become “indefinite” meaning, for all practical purposes, permanent.

Hicham Hamza is virtually the only investigative journalist in France with the courage to question the official stories of the Charlie Hebdo and 11/13 attacks.

Please support him by visiting his Panamza website and scrolling to the bottom, where you will find a paypal donation button.

Below is my translation of Hicham Hamza’s article describing his arrest.

Detained by police for investigating the attacks in Paris

An independent journalist and founder of the investigative website Panamza, I was detained for seven hours by police about an article in which I revealed the Israeli origin of the shocking photo of the Bataclan.

On Monday, February 22nd, I went of my own accord to the police station in response to a summons from the Crimes Against Persons Brigade, located in the 13th arrondissement of Paris.

The day before, I had received an “urgent” voice message from an official of the Directorate of the Judicial Police asking me to call him immediately.

The reason: my  December 15th article entitled “Bataclan Carnage: The shocking photo was disseminated from Jerusalem.”

I was familiar with the Judicial Police premises, having been summoned twice to to respond to “defamation” complaints brought against me by Caroline Fourest and Pierre Bergé.

Surprise! This time, upon arrival I was “placed in custody” following a preliminary investigation by the Paris prosecutor.

The officer informed me that I was now suspected of having committed – by publishing my article – the following offenses: “violation of the secrecy of an investigation”, “publication of an image that seriously undermines human dignity,” and “premeditated voluntary violence without ITT.”*

So what happened next?

I was led to cell to await the arrival of my lawyer Isabelle Coutant-Peyre so that she could be present, as the law allows, during my interrogation.

After the interrogation, I was made to read and sign the minutes of my statements. I was then returned to detention pending the police response. Five hours later I left the musty old double-locked room to learn that no decision had been taken by the prosecutor of the Republic.

I was finally allowed to collect my things and go.

The merits of the case?

While following the torturous trail of the shocking, anonymous Bataclan massacre photo, I had done my work as an investigative journalist. My objective was to fully document my sources. So in my article, I inserted the URL of the first web page containing the non-blurred Bataclan picture (which I had chosen to truncate on my site).

The original source of the photo turned out, oddly enough, to be a tweet published by an Israeli organization headed by the US neoconservative Mark Gerson.

My practice – which is increasingly costly and risky – of ultra-sourced web journalism is my guarantee of  reliability for my readers: I give them my sources to check so they can judge for themselves the veracity of my information.

Today, the Paris prosecutor – who reports directly to the Ministry of Justice – claimed that I had supposedly “violated the secrecy of the investigation” and committed “premeditated voluntary violence” by “disseminating” the photo necessarily included in this tweet.

I had already said in my hearing that I contested with the greatest force the validity of such accusations.

The Paris prosecutor’s office, directed by François Molins, now has six months to decide whether to indict me.

Keep in mind that on December 1st, the Valls government had announced – via its interministerial delegate Gilles Clavreul – its hostility against me, confessing awkwardly that it would seek “legal loopholes to get (Hamza) prosecuted.”

Meanwhile, the arrival of Jean-Jacques Urvoas to head the Department of Justice was accompanied, more discreetly, by another little-noticed change. Thomas Andrieu, the director of the Civil Liberties and Legal Affairs Bureau of the Ministry of Interior (and former right arm of Manuel Valls) became on February 5th the chief of staff of the new Minister of Justice.

On December 2nd I had published an article about this close associate of the pro-Israel network. The chief architect of the state of emergency, Thomas Andrieu had been previously charged with carrying out the government’s promise (which was in the end never kept) of dissolving the Jewish Defense League.

(Editor’s note: Responsible for dozens if not hundreds of terrorist attacks, and untold thousands of threats of violence, the JDL has been officially declared a terrorist organization by the FBI; yet due to the power of the Zionist lobby it remains legal in France, Canada, and other countries.)

A detail that speaks volumes: In my article “Bataclan Carnage: The shocking photo was disseminated from Jerusalem,” I also raised questions about the JDL, stressing that this Zionist and racist militia, which is tolerated in France (but considered a terrorist group the United States and Israel) had directly published the gruesome Bataclan photograph on the homepage of its website.

We still do not know all the details about provenance and chain of custody of the photograph in question, which was designed to elicit terror, and whose authenticity is has been much discussed in the foreign alternative media. What we do know is that it first appeared on the website of a webmaster based in Jerusalem.

But it should come as no surprise that the Jewish Defense League – a small group linked to similar networks of the Israeli extreme right – could publish the photo without attracting the wrath of Bernard Cazeneuve, the Minister of the Interior who is extremely obliging to the the Zionist movement and its operational relay in France: the Mossad.

Surprise, surprise: Along with the explicit title “Bataclan photo of the victims,” the shocking picture, whose publication by the JDL was exposed a month later on Panamza, has since been replaced by an off-topic illustration showing… the seats in the house.

Someone in high places must have protected the JDL from any police summons by quietly asking them to remove the photograph.

As for me: For revealing the Israeli source of the image,which was manipulated through social media to  instill fear and acceptance of draconian security measures, I was detained by police, at the request of prosecutors, for seven hours.

Now I am under threat of new prosecutions likely to bring, this time, a prison sentence.

I have no illusions about the traditional corporate media, with its complete indifference to my detention.

After eight years of exercising my investigative reporting skills on taboo subjects, namely the Zionist movement and false flag terrorism, I reclaim outsider status with respect to the profession, as a journalist – to borrow a phrase Glenn Greeenwald – “who was never part of the seraglio.”

I no longer count on the public support of certain personalities and associations that are generally engaged in opposing disinformation or the Israeli apartheid regime: most have unfortunately agreed to become the useful idiots of the Valls government, even to the point of offering the fashionable denunciation, worthy of the old totalitarian regimes, of the “conspiracy theorists.”

This intellectual fraud is designed to demonize anyone who challenges official pronouncements.

I count on you, loyal and benevolent reader. Your support is my stronghold.

Translator’s note: * “Without ITT” means violence that did not result in anyone being even temporarily disabled in any way.