The Justice Department has granted immunity to a former State Department staffer, who worked on Hillary Clinton’s private email server, as part of a criminal investigation into the possible mishandling of classified information, according to a senior law enforcement official.

As the FBI looks to wrap up its investigation in the coming months, agents are likely to want to interview Clinton and her senior aides about the decision to use a private server, how it was set up, and whether any of the participants knew they were sending classified information in emails, current and former officials said.

So far, there is no indication that prosecutors have convened a grand jury in the email investigation to subpoena testimony or documents, which would require the participation of a U.S. attorney’s office.

The Washington Post reports the Hillary campaign is “pleased” that Pagliano, who invoked his Fifth Amendment rights before a congressional panel in September, is now cooperating with prosecutors.

In a statement, Brian Fallon, a spokesman for the Clinton campaign, said: “As we have said since last summer, Secretary Clinton has been cooperating with the Department of Justice’s security inquiry, including offering in August to meet with them to assist their efforts if needed.”

“There was wrongdoing,” said a former senior law enforcement official. “But was it criminal wrongdoing?”

But as TheBlaze.com reports, Judge Andrew Napolitano warns “She should be terrified of the fact that he’s been granted immunity,” adding that “they would not be immunizing him and thereby inducing him to spill his guts unless they wanted to indict someone.”

Napolitano argued that the revelation that former Clinton aide Bryan Pagliano, who set up Clinton’s private email server in 2009, is reportedly being offered immunity means he will likely be called to testify against someone much higher on the “totem pole.”

Pagliano will likely be asked how he was able to “migrate a State Department secure system onto her private server.” He then presented this theoretical question: “Mr. Pagliano, did Mrs. Clinton give you her personal Secretary of State password to enable you to do that?”

“If he answers, ‘yes,’ we have an indictment for misconduct in office as well as espionage. She should be terrified of the fact that he’s been granted immunity,” Napolitano added.

The Judge explained that only a federal judge can grant immunity and will only do so if a sitting jury is ready to hear testimony from the “immunized person,” suggesting the investigation is well on its way to a possible indictment.

“We also know they are going to seek someone’s indictment, because they would not be immunizing him and thereby inducing him to spill his guts unless they wanted to indict someone,” he said.

Napolitano admitted we don’t know who the DOJ is looking to indict, but he noted there are only about five people between Pagliano and Clinton. But as WaPo concludes…

The kindest possible reading of this news for Clinton is that Pagliano was simply nervous to talk about how — and why — he had set up the email server, and granting him immunity lets him speak freely without any concern that he might get into trouble.

Maybe. But it’s my strong impression that the Justice Department doesn’t go around granting immunity to people unless the person getting the immunity may be able to shed light on an important part of the investigation.

After all, if Pagliano a) knew nothing or b) did nothing wrong, why would he need immunity to talk to the FBI? 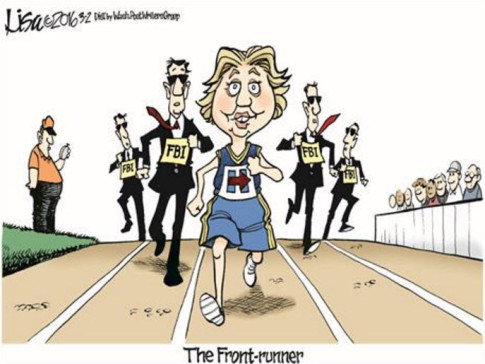