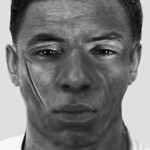 Police are appealing for witnesses after they were unable to trace a man who propositioned a 13 year old girl for sex, offering her money, and then head-butted her after she refused. The attacker, who struck in late January has been described as having “shiny” black skin, “very short, black curly hair” and a “conspicuously long scar on the right cheekbone”.

The man, who spoke broken German with a foreign accent left the girl with minor injuries, reports Express.