Update: Sure enough, AKP says this is being treated as “an act of terror” and we also have news that Turkish President Recep Tayyip Erdogan has set up an emergency security meeting in Ankara, Turkey. 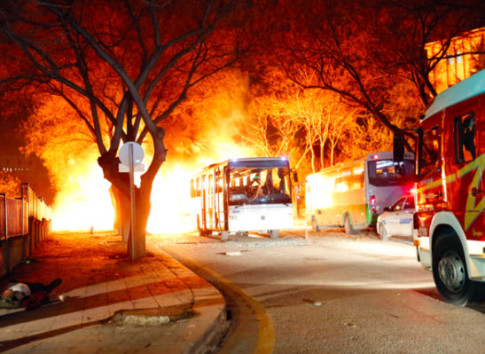 With Turkey on the brink of going to war with Russia and, implicitly, Iran, President Recep Tayyip Erdogan is looking for an excuse to invade Syria.

The rebels Turkey and Saudi Arabia back are staging what amounts to a last stand at Aleppo and the Kurdish YPG is moving to cut the Azaz corridor, which would effectively mean that Turkey has no way of resupplying the insurgency.

For the past five days, Ankara has been shelling the YPG in a futile attempt to stop their advance.

The only thing that can save the rebellion against Bashar al-Assad is an outright ground operation by the rebels’ Sunni benefactors, including Turkey.

All Erdogan needs is a pretext and he may have just gotten one as reports indicate there’s been a huge explosion in Ankara near parliament and at least 5 people are dead.

A car-bomb attack hit the Turkish capital Wednesday night, killing at least five people and wounding 10 others, according to Turkish officials.

The huge explosion struck in Ankara outside a military housing complex, a short distance from the Turkish armed forces headquarters. Turkey’s state-run Anadolu news agency said the explosion happened as military buses were passing by.

Authorities dispatched ambulances and fire engines to the area, as well as police forces to cordon off the scene.

Turkey’s Prime Minister Ahmet Davutoglu told reporters that the government is investigating the explosion, according to Anadolu news.

A video of the explosion:

Early indications are that military barracks were targeted. A “large number of casulaties” are rumored. Expect this to be pinned on either ISIS or the PKK. If it’s the latter, Ankara will once again claim that the group is working in concert with the YPG and that will be all the evidence Erdogan needs to march across the border.

Here is the first video/live report from the explosion site in front of a military housing in #Ankara. pic.twitter.com/DQJe2RcaZy