Over the weekend, the biggest story in the geopolitical world was Turkey’s escalation in Syria.

With the Sunni-backed opposition on its last legs in Aleppo and under near constant bombardment by Russia from the air and Hezbollah on the ground, Ankara and Riyadh have a decision to make: intervene or allow the rebellion to be crushed.

We’ve spilled quite a bit of digital ink explaining why allowing the rebels to be routed really isn’t an option. It would represent a key victory for Iran at a time when the country is already on a roll. International sanctions have been lifted, oil revenue is set to quintuple by year end, and Tehran’s grip on Iraqis military and politicians is stronger than ever. A victory in Syria would be an embarrassment for the Saudis who have funded and armed the opposition and a win at Aleppo would give the Iranians sectarian bragging rights at a time when tensions between Riyadh and Tehran are already running high thanks to the execution of prominent Shiite cleric Nimr al-Nimr.

And so, with the stakes high, the Saudis sent warplanes to Turkey’s Incirlik air base and Turkey promised an imminent “escalation.” The problem, we said, is this: somehow, Turkey and Saudi Arabia need to figure out how to spin an attack on the YPG and an effort to rescue the opposition at Aleppo as an anti-ISIS operation even though ISIS doesn’t have a large presence in the area.

Well that problem hasn’t been solved, but Turkey doesn’t seem to care. Ankara began shelling YPG positions over the weekend at Menagh air base, which the Kurds seized from Turkey-backed rebels just days ago.

Turkey claims this is about self defense. Erdogan equates the YPG (which is supported overtly by the US) with the PKK, Ankara’s arch enemy that’s recognized by Washington as a “terrorist” group.

The YPG have consolidated gains in northern Syria and are essentially trying to bridge the territory they hold east of the Euphrates with their territory in the west. That, Turkey says, isn’t going to happen. “YPG elements were forced away from around Azaz. If they approach again they will see the harshest reaction,” Turkish PM Ahmet Davutoglu said on Monday. “We will not allow Azaz to fall.”

Of course Azaz already “fell” – to Islamist rebels backed by the Turks who are aiming to usurp the government of a sovereign state. 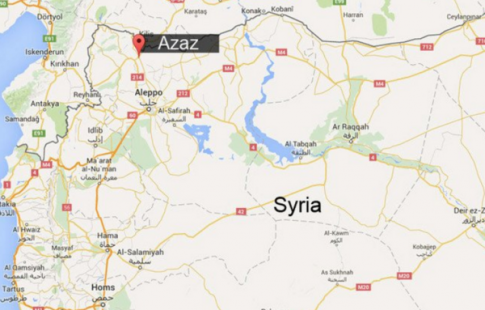 In any event, more than a dozen civilians were killed in Azaz on Monday when missiles hit a children’s hospital. “At least 14 civilians were killed when missiles hit a children’s hospital, a school and other locations in the rebel-held Syrian town of Azaz near the Turkish border,” Reuters reports. “At least five missiles hit the hospital in the town center and a nearby school, where refugees fleeing a major Syrian army offensive were sheltering [and] another refugee shelter south of the town was also hit by bombs dropped by jets believed to be Russian.”

Yes, the jets are “believed to be Russian,” although Davutoglu just finished explaining how the YPG will face “the harshest reaction” if it advances on the town.

We suppose it’s not at all possible that the Turkish army made a little targeting “mistake” with some mortars.

Also on Monday, another MSF affiliated hospital was destroyed in Idlib. “This appears to be a deliberate attack on a health structure,” Massimiliano Rebaudengo, the Doctors Without Borders head of mission in Syria said. “The destruction of the hospital leaves the local population of around 40,000 people without access to medical services in an active zone of conflict.” Here’s what was left of the building after the strike: 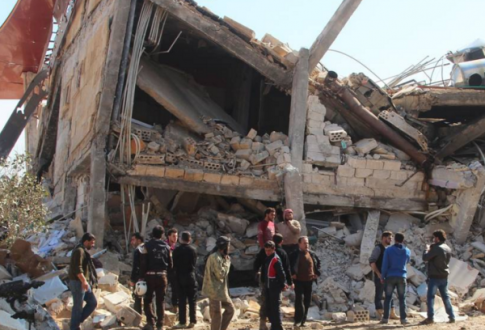 As Reuters goes on to note, “tens of thousands of people have fled to Azaz, the last rebel stronghold before the border with Turkey.”

“We have been moving scores of screaming children from the hospital,” one medic said.

According to Davutoglu, the school and the hospital were hit by “a Russian ballistic missile.” The PM also said Russia and the YPG have closed the “humanitarian border” north of Aleppo. In reality, Russia and Iran have closed Turkey’s supply line to the rebels. It has nothing to do with “humanitarian aid.” Moscow and Tehran have no interest in starving the people of Aleppo. They do, however, have an interest in starving the rebels of guns.

That’s what the weekend’s hostilities were all about. Turkey hasn’t figured out exactly how to intervene at Aleppo without getting into an open confrontation with Russia, but everyone knows Erdogan hates the YPG, so Ankara figured shelling the Syrian Kurds advancing on Azaz from the west would effectively kill two birds with one stone: it would help keep supply lines to the rebels open, and some Kurds would be killed in the process. And no one, Turkey figures, is going to get too bent out of shape about it because let’s face it, Turkey has been shelling the Kurds in Syria for months anyway.

Whoever was responsible for the multiple civilian casualties that unfolded across the country on Monday, it’s not going to deter the Russians from routing the opposition… er… “the terrorists.” “We are fighting with the terrorist groups (Islamic State), Nusra Front, and others linked to al Qaeda,” Russian Deputy Foreign Minister Gennady Gatilov said in an interview with Der Spiegel. “Strikes on terrorist groups will continue in any case, even if a cease-fire is agreed upon in Syria.”

Why, one might fairly ask, does the “international community” have a say in this at all? Had Syria been left to handle its own affairs five years ago, we wouldn’t be in this mess and the world wouldn’t be teetering on the edge of a global conflict. Well, at least not over Syria.