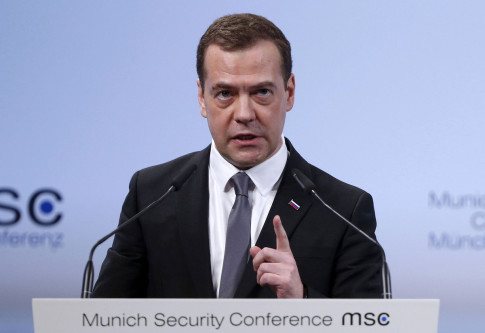 Fresh from helping craft the accord for Syria, Russian Foreign Minister Sergei Lavrov suggested that the U.S. is reneging on the agreement and put the chances of success at less than 50 percent. U.S. Secretary of State John Kerry, addressing the meeting separately, demanded an end to Russian bombing of groups opposed to Syrian President Bashar al-Assad.

“This is a hinge point,” Kerry told the Munich Security Conference on Saturday. “We hope this week can be a week of change. It is critical for all of us to take advantage of this moment to make this cessation of hostilities work.”

“The political line of NATO toward Russia remains unfriendly and closed,” Medvedev said in a speech. “It can be said more sharply: We have slid into a time of a new Cold War.”

All major outside powers in Syria’s five-year-old conflict, including the U.S., Russia, Turkey, Saudi Arabia and Iran, on Friday backed a truce that’s set to start on Feb. 19. Peace efforts intensified as Russian President Vladimir Putin’s almost six-month bombing campaign backing Assad delivers results, with government forces threatening to drive rebels out of Aleppo, one of their strongholds.

Lavrov said the agreement “won’t lead to anything” unless there’s constant military coordination between Russia and the U.S. in Syria. He and Kerry met later Saturday to discuss the matter and agreed on “concrete steps” to be taken in the next few days toward that goal, Russian Foreign Ministry spokeswoman Maria Zakharova said.

The U.S. has refused to coordinate its coalition’s airstrikes against Islamic State in Syria with the Russian bombing campaign because of accusations Russia isn’t focused on the jihadists but the Assad opposition.

Kerry warned Russia to stop bombing Assad opponents that aren’t jihadists. “To date, the vast majority — in our opinion — of Russia’s attacks have been against legitimate opposition groups,” he said in his speech. “We think it is critical that the Russians’ targeting changes.”

Russia’s military intervention since September has upended U.S.-backed efforts to force Assad from power, raised speculation that U.S. allies Saudi Arabia and Turkey may escalate their involvement in the conflict and added to the flow of refugees that’s straining unity in the European Union. About 260,000 people have died in Syria’s war, which has caused the biggest migrant crisis in Europe since World War II and escalated the threat of terrorist attacks.

Kerry sought to maintain pressure on Putin over Russia’s encroachment on Ukraine, which led to sanctions on Russia and a peace plan brokered by Germany and France last year in Minsk, Belarus, that has stalled. With the armed standoff between pro-Russian separatists and government troops in eastern Ukraine unresolved, Lavrov met his counterparts from Germany, France and Ukraine on the conference’s sidelines on Saturday.