BTFD? Deutsche Bank stock crashed over 11% today (the most since July 2009) to its lowest since January 2009 record lows. We have detailed at length why this is a major systemic problem and we wonder how anyone can view this chart and not question their full faith in central planners engineering of the ‘recovery’. Nothing is fixed and it’s starting to become very obvious!

Does this look like a buying opportunity? At EUR13.465 today, DB is within pennies of the all-time record lows of EUR13.385… 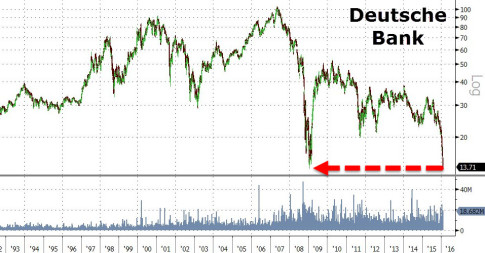 As we explained earlier, since Europe unleashed their “Bail-In” regulations, European banks have utterly imploded with Deustche most systemically affected as it seems more than one person is betting that Deutsche will be unable to raise enough capital and will be forced to haircut depositors on up in the capital structure.

Finally – for those desperate dip-buyers hoping for another move from Draghi – don’t hold your breath… As Deutsche Bank itself warned, any more easing by The ECB or BOJ will only hurt banks (and certainly Deutsche). In other words, they are all officially trapped now.