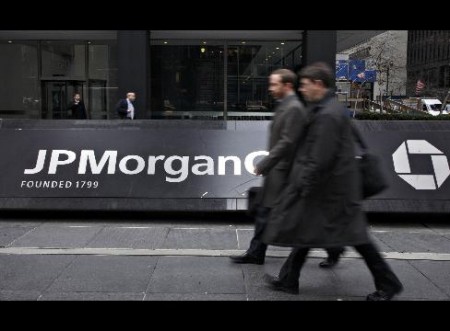 In the wake of 2008, it’s probably safe to say there isn’t a person alive who completely trusts a banker.

If, however, you happen to be dead, it’s more difficult to scrutinize the activities of those conducting your finances, a fact underscored by the alleged theft of hundreds of thousands of dollars from at least eight accounts belonging to deceased clients of JP Morgan.

According to an indictment filed this month in State Supreme Court in Brooklyn, Jonathan Francis and Dion Allison, employees at a Bedford-Stuyvesant branch, made hundreds of withdrawals from the accounts using ATM cards they issued. One of those charged told investigators he “used the log-on IDs of co-workers when they walked away from their desks,” Bloomberg reports.

As The New York Times goes on to recount, “Mr. Allison, 30, and Mr. Francis, 27, created bank cards for several of the dormant accounts [and] with two friends, Gregory Desrameaux, 24, and Kery Phillips, 40, the men then withdrew most of the stolen money, about $300,000, by using A.T.M.s around New York City.”

But it gets worse. Here’s more from The Times:

In April 2013 alone, members of the group made withdrawals on 26 of 30 days, according to the indictment. One night at a Chase branch at Nostrand and Church Avenues, they withdrew $1,000 from one account; 49 seconds later, group members took out $1,000 from a different account.

By May of that year, people in the group had created fake power of attorney documents. That gave Mr. Phillips control of four of the dormant accounts, Adam Zion, an assistant district attorney, said in court on Monday.

This allowed Mr. Phillips to withdraw much more money than the daily A.T.M. limit, up to $9,500 at a time, through a teller.

In another example of the scheme, in February 2013, according to the indictment, Mr. Allison created a bank card for one account. That May, at a Chase branch on Flatbush Avenue, Mr. Phillips turned in fake power of attorney documents giving him control of the account. The same day, prosecutors said, Mr. Phillips withdrew through a teller $49,929.91 — everything that remained — from the account.

The four face charges of conspiracy, grand larceny and falsifying business records and could face up to 15 years in prison if convicted.

Allison was arraigned on Monday. Francis denies the allegations as does Desrameaux. Phillips is in the wind apparently. As others have noted, this isn’t the first time JP Morgan employees have stolen from customer accounts. Earlier this year, Michael Oppenheim, an investment adviser, was charged with stealing $20 million from seven of his clients while Peter Persaud, who also worked at a Brooklyn branch, allegedly sold client account numbers, Social Security numbers, and DOBs to an undercover agent.

So while you can apparently still go to jail for robbing clients the old fashioned way, JP Morgan, like its bulge bracket brethren, can count on token fines and wrist slaps for rigging FX markets, diverting excess deposits to massive curve trades in off-the-run CDS indices, and other instances of more “innovative” highway robbery.

And the punchline to the whole story: it comes courtesy of weak internal procedures meets Washington’s grossly inefficient bureaucracy:

While prosecutors believe most, if not all, of the account holders have died, benefit checks continued to be deposited because of faulty reporting to the Social Security Administration.