Since initially reporting on California’s Alison Canyon gas leak, more details have emerged on the scale (and potential for no solution) of the problem as the infamous Erin Brockovich writes, “the enormity of the Aliso Canyon gas leak cannot be overstated. Gas is escaping through a ruptured pipe more than 8,000 feet underground, and it shows no signs of stopping,” as according to the California Air Resources Board, methane – a greenhouse gas 72 times more impactful in the atmosphere than carbon dioxide – has been escaping from the Aliso Canyon site with force equivalent “to a volcanic eruption” for about two months now.

Infographic of leak (and potential solution) 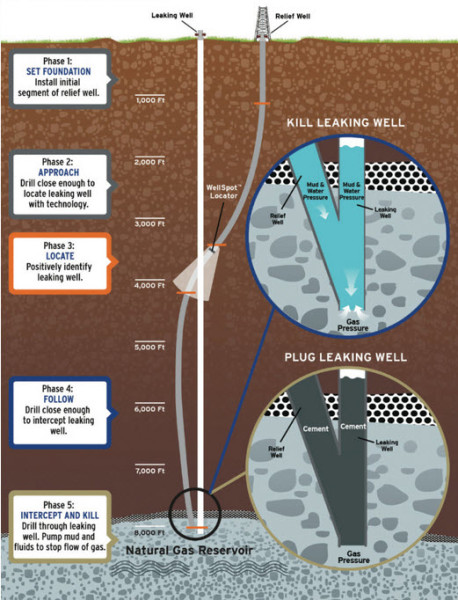 As TheAntiMedia.org’s Claire Bernish details, methane gas continues spewing, unchecked, into the air over southern California from a fractured well to an underground storage site — at such an alarming rate that low-flying planes have necessarily been diverted by the FAA, lest internal combustion engines meet highly volatile gas and, well, blow the entire area to hell.

This is, indeed, the biggest environmental catastrophe since the BP Deepwater Horizon oil rig exploded in the Gulf of Mexico in 2010; and for now, there is no way to stop it.

This methane disaster is worse than can be sufficiently described in words, because while it’s estimated well over 100,000 pounds of methane spew into the atmosphere every hour, the leak can’t be halted, at least until spring. Even then, that stoppage depends entirely on the efficacy of a proposed fix — which remains a dubiously open question.

According to the California Air Resources Board, methane — a greenhouse gas 72 times more impactful in the atmosphere than carbon dioxide — has been escaping from the Aliso Canyon site with force equivalent “to a volcanic eruption” for about two months now. So far, the total leaked gas measures somewhere around 100,000 tons — adding “approximately one-quarter to the regular statewide methane emissions” during that same time frame.

“The relative magnitude of emissions from the leak compared to other sources of methane in the State underscores the urgency of stopping the gas leak. This comes on top of any problems caused by odor and any potential impacts from exposure,” states the initial report on the Aliso leak by air quality officials.

“The enormity of the Aliso Canyon gas leak cannot be overstated. Gas is escaping through a ruptured pipe more than 8,000 feet underground, and it shows no signs of stopping. As the pressure from the weight on top of the pipe causes the gas to diffuse, it only continues to dissipate across a wider and wider area,”explained Erin Brockovich, who spent time in nearby Porter Ranch investigating the leak.

Officials and experts are concerned, and they can’t recall another leak of this magnitude in decades — if ever. “I asked this question of our staff of 30 years,”said Steve Bohlen, who recently left his position as state supervisor of oil and gas. “This is unique in the last three or four decades. This is an unusual event, period.”

Though methane, itself, has no odor, the addition of odorants methyl mercaptan and tetrahydrothiophene — a safety measure to alert people by smell to the presence of natural gas — has made the enormous methane seepage impossible to ignore. Thousands of households have evacuated the area, despite little help, much less information, from the gas company about when they might be able to return. As reported by the Los Angeles Times, SoCalGas spokesperson Michael Mizrahi claimed the company had paid to relocate and house 2,092 households — but that effort is severely lacking, says Los Angeles City Attorney Mike Feuer.

Yesterday, the city attorney’s office sought a restraining order to mandate SoCalGas relocate residents in the affected area within 48 hours of their request; and it is also seeking a “special master” to oversee the entire relocation operation, which is currently being handled by the gas company. Not only does the present relocation lack speed and coordination, but a housing crunch has resulted in surrounding areas — in some cases landlords, who prefer year-long leases to shorter terms, have driven rent as high as $8,500 per month. Hotels are operating at capacity, and in “some of those hotel rooms there are not enough beds for the people who are being moved,”explained chief deputy to the city attorney, James P. Clark.

“It’s time Porter Ranch residents had direct and complete answers about all facets of this leak,” Clark continued, “including what caused it, how to stop it, and what will be done to assure it never happens again. They should receive better, quicker, and completely adequate relocation assistance.”

On Thursday, Los Angeles Unified School District board members voted unanimously to close two Porter Ranch schools and relocate their 1,900 students and staff to different locations for the foreseeable future. A local emergency has been declared by the Los Angeles County Board of Supervisors.

Multiple lawsuits have now been initiated against SoCalGas and/or its parent company, Sempra Energy. A Los Angeles firm representing three of the families, who filed their suit Friday, described in a statement that the well has been “leaking noxious odors, hazardous gases, chemicals, pollutants, and contaminants due to a massive well failure and blowout. However, SoCalGas failed to inform residents of neighboring communities of the disastrous gas leak in a timely manner, putting the health and well-being of thousands of families in jeopardy.” Those suits allege “negligence, strict liability of ultra-hazardous activity, private nuisance, inverse condemnation, and trespass.”

A class-action lawsuit has also been filed on behalf of the Save Porter Ranch group; and City Attorney Mike Feuer filed a civil suit earlier this month due to the leak’s continued threat to residents’ health and damage to the environment, alleging failure by SoCalGas to prevent the leak and further exacerbation of “the effects of that failure by allowing the acute odor and health problems faced by the community to persist for more than one month, to say nothing about the indefinite time it will persist into the future,” state the court documents. “No community should have to endure what the residents of Porter Ranch have suffered from the gas company’s continued failure to stop that leak,” Feuer stated.

SoCalGas insists there will be no long-term health effects resulting from the persistent leak; but as Brockovich pointed out, “no one really knows the potential long-term side effects of benzene and radon, the carcinogens that are commonly found in natural gas.” In an email to the Los Angeles Daily News, SoCalGas stated they were “providing air filters for people’s homes” and “have established a claims process for those who feel they may have suffered harm or injury. And our top priority remains stopping this leak as quickly and safely as possible.

“While the odor added to the leaking gas can cause symptoms for some, the gas is not toxic and county health officials have said the leak does not pose a long-term health risk.”

But what’s making this massive leak so difficult to stop pertains to the storage ‘container,’ itself. “We have the largest natural gas storage system in the world,” boasts Chris McGill, vice president of the American Gas Association. In the United States, old underground oil fields are often put to use as storage vessels for natural gas — because, hey, that geology worked just fine to hold oil for millions of years, so why not natural gas?

In fact, there are some 300 such depleted subterranean oil fields being employed this way around the United States. Aliso Canyon, a natural gas storage site since the 1970s, has one of the largest capacities: 86 billion cubic feet. During the summer, gas earmarked for winter heating is pumped into these underground cavities by SoCalGas — and the process is reversed with the turn of the seasons. However, this year, workers encountered what quickly became evident was anything but a typical hiccup. As Wiredreported:

“On October 23, workers noticed the leak at a 40-year-old well in Aliso Canyon. Small leaks are routine, says Bohlen, and SoCalGas did what it routinely does: put fluid down the well to stop the leak and tinker with the well head. It didn’t work. The company tried it five more times, and the gas kept leaking. At this point, it was clear the leak was far from routine, and the problem was deeper underground.”

Beginning December 4th, SoCalGas crews began drilling a relief well to intercept the fissured pipe. Cement will then be poured into both to seal the wells permanently. Of course, for this to work, crews must locate that original pipe, which is a mere seven inches in diameter, thousands of feet underground — without accidentally creating any sparks, whatsoever. Work near the leak site, therefore, has been prohibited after nightfall, when lighting equipment could potentially cause such a spark; though drilling for the relief well is situated far enough away to continue nonstop.

Flaring, or setting a deliberate fire to burn off excess gas, simply isn’t an option. The mammoth scope of this leak means a flare would ultimately complicate matters even further.

“There is no stone being left unturned to get this well closed,” Bohlen stated. “It’s our top priority.”

In the meantime, it will be months without any possibility of halting this disaster-in-motion. Sickened, uprooted, and furious residents can rest assured, though, because even as methane spews nonstop into the air, SoCalGas did have this consolation:

“We are deeply sorry for the frustration.”