Since 1997 – long before Fukushima – I’ve been recommending NOT to eat anything coming out of the ocean.

Seafood is highly contaminated with mercury and arsenic.

Posted about this before:

– EVERY Bluefin Tuna Caught Off California Coast Is Radioactive (Aug 24, 2013)

I highly recommend to avoid seafood!

ALL the bluefin tuna is radioactive. ALL!!! 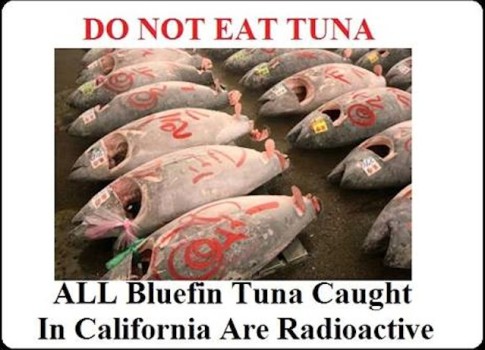 VIA| Three years ago they told us they were surprised to find the fish contaminated after limited exposure to radioactive water. As this article points out, all of the bluefin tuna being caught now have spent their entire lives exposed to radioactive water. If you didn’t hear the warning  years ago, please hear it now.

Every bluefin tuna tested in the waters off California has shown to be contaminated with radiation that originated in Fukushima. Every single one.

In May of 2012, the Wall Street Journal reported on a Stanford University study. Daniel Madigan, a marine ecologist who led the study, was quoted as saying, “The tuna packaged it up (the radiation) and brought it across the world’s largest ocean. We were definitely surprised to see it at all and even more surprised to see it in every one we measured.”Another member of the study group, Marine biologist Nicholas Fisher at Stony Brook University in New York State reported, “We found that absolutely every one of them had comparable concentrations of cesium 134 and cesium 137.”

That was over two year ago. The fish that were tested had relatively little exposure to the radioactive waste being dumped into the ocean following the nuclear melt-through that occurred at the Fukushima Daiichi plant in March of 2011. Since that time, the flow of radioactive contaminants dumping into the ocean has continued unabated. Fish arriving at this juncture have been swimming in contaminants for all of their lives. 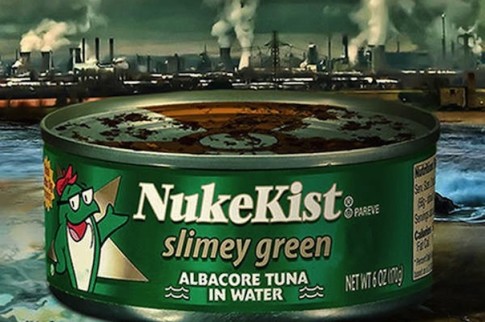 Radioactive cesium doesn’t sink to the sea floor, so fish swim through it and ingest it through their gills or by eating organisms that have already ingested it. It is a compound that does occur naturally in nature, however, the levels of cesium found in the tuna in 2012 had levels 3 percent higher than is usual. Measurements for this year haven’t been made available, or at least none that I have been able to find. I went looking for the effects of ingesting cesium. This is what I found:

When contact with radioactive cesium occurs, which is highly unlikely, a person can experience cell damage due to radiation of the cesium particles. Due to this, effects such as nausea, vomiting, diarrhea and bleeding may occur. When the exposure lasts a long time, people may even lose consciousness. Coma or even death may then follow. How serious the effects are depends upon the resistance of individual persons and the duration of exposure and the concentration a person is exposed to.

When contact with radioactive cesium occurs, which is highly unlikely, a person can experience cell damage due to radiation of the cesium particles. Due to this, effects such as nausea, vomiting, diarrhea and bleeding may occur. When the exposure lasts a long time, people may even lose consciousness. Coma or even death may then follow. How serious the effects are depends upon the resistance of individual persons and the duration of exposure and the concentration a person is exposed to.

The Fukushima disaster is an ongoing battle with no signs that humans are gaining the upper hand. The only good news to come out of Japan has later been proven to be false and was nothing more than attempts by Tokyo Electric Power Company (TEPCO) to mislead the public and lull them into a sense of security while the company searched vainly for ways to contain the accident. This incident makes Three Mile Island and Chernobyl pale in comparison. Those were nuclear meltdowns. A nuclear melt-through poses a much more serious problem and is one that modern technology doesn’t have the tools to address. Two and a half years later and the contaminants are still flowing into the ocean and will continue to for the foreseeable future.

The FDA assures us that our food supply is safe, that the levels of radiation found in fish samples are within safe limits for consumption. But one has to question if this is true and, if it is true now, will it remain true? Is this, like the statements issued from TEPCO, another attempt to quell a public backlash in the face of an unprecedented event that, as yet, has no solution and no end in sight?

As for me, fish is off the menu.

In this second video, Kevin Kamps, Beyond Nuclear, joins Thom Hartmann. Radioactive fish are swimming in U.S. waters. For the first time, scientist have discovered Bluefin tuna, that were contaminated by the Fukushima Nuclear Crisis in Japan in 2011, swimming off the coast of California. Radioactive cesium ten times above the normal level was found in the fish.