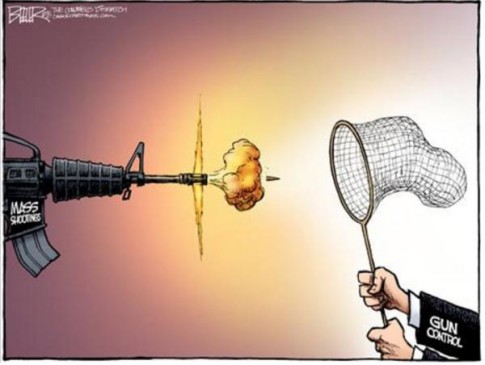 “In addition, gun crime, despite an exponential increase in privately owned firearms over the same period, has steadily declined for about 20 years, except for high-profile shootings in gun-free zones.”

The White House cannot name one single shooting incident that would have been prevented by gun control legislation.

Josh Earnest couldn’t directly answer the question and floundered around repeating the same talking points over and over again.

Reporter Byron Tau referred to a statement made by Sen. Marco Rubio that no mass shootings in recent memory would have been prevented by gun legislation, which even the Washington Post fact-checked as true.

“If not a single recent mass shooting would have been stopped by the kind of gun control measures you champion, are those the right approach to this problem?” Tau asked.

“…there is no piece of legislation that Congress can pass that would prevent every single act of gun violence,” Earnest added, avoiding the question.

“I think the case that we have made is one that rests primarily on our concern about national security and our careful consideration of common sense.” he stated, again avoiding the question entirely.

Earnest then diverted the talking point to the terrorist no-fly-list, prompting Tau to follow up, “Were any of the recent mass shooters on the ‘no-fly’ list?”

“Not that I’m aware of,” Earnest admitted. “You’ll probably have to ask the director of national intelligence to confirm that.”

The reporter stuck to the central issue at hand – that gun control legislation is not a fix for mass shootings.

“Can the White House point to a recent mass shooting that would have been stopped by a expanded assault weapons ban or stricter background checks?” Tau asked.

“The evidence seems to be that in all these recent mass shootings, these folks either passed background checks or were very determined to circumvent the strict gun laws that are already on the books.” the reporter added.

The shooter at Washington Navy Yard even managed to buy his firearm after the background check system was supposedly strengthened following the incident at Virgina Tech.

The BATF has also determined that Syed Rizwan Farook, one of the two shooters in San Bernardino, also legally purchased two of the weapons at a gun shop in Corona.

The reporter pressed Earnest, asking “Can you point to any that would have been prevented or stopped by the kind of proposals the White House is championing?”

Earnest again repeated the “common sense” talking point without addressing the actual question and threw in a smattering of empty “national security” rhetoric.

Last week when addressing the same line of questioning, Earnest admitted that further gun control legislation would not have prevented the San Bernardino shooting, and that it is purely “hypothetical” that terrorist incidents could be prevented with such new laws.

While the Obama administration is seemingly hell bent on going after stricter gun control, research from Pew Research Center, the FBI, and the Centers for Disease Control and Prevention, reveals that gun violence in the US is actually on the decline, and is at its lowest since the 1960s.

In addition, gun crime, despite an exponential increase in privately owned firearms over the same period, has steadily declined for about 20 years, except for high-profile shootings in gun-free zones.