– Putin Hopes “There Will Be No Need To Nuke” The Islamic State:

Earlier today, in a clear advance notice to the French and US navies which are both set to arrive just off the coast of Syria in the coming weeks, Russia for the first time targeted Islamic State targets in Syria with Kalibr land-attack cruise missiles launched from a submarine in the Mediterranean Sea off the Syrian coastline, according to Russia’s Defense Minister.

While as reported here before, Russian warships based in the Caspian and Mediterranean seas had launched similar missiles targeting ISIS positions in late November, this was the first time that Russia has targeted IS in Syria from a submarine.

The submarine cruise missile launch and subsequent strikes are shown in the clip below:

According to a Kremlin transcript of the conversation, Shoigu told Putin that the missiles successfully targeted two major terrorist positions in the territory of Raqqa, adding that “we can say with absolute confidence that significant damage has been inflicted upon ammunition warehouses and a mine production plant, as well as the oil infrastructure.”

In addition to the submarine, a Russian Ministry of Defense source revealed that the Rostov-on-Don, equipped with modern Russian Kalibr cruise missiles, had appeared near the Syrian coast. Additionally, just before the USS Harry S. Truman carrier arrives, the Russian cruiser Varyag, which is currently off India’s coast for Exercise Indra till Dec. 12, will set sail for the Mediterranean to replace the cruiser Moskva. 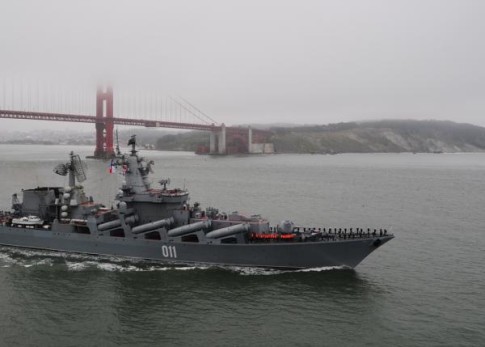 However, what was most notable in today’s update by the Russian defense ministry was neither the news about the sub, or the second ship deployment, but what Putin told Shoigu during their conversation according to the Kremlin’s transcript. Which is as follows:

Regarding the submarine strikes we must, of course, analyze everything that happens on the battlefield, how the weapons acts. Both the “Kalibrs” and the X-101 rockets as a whole proved to be very good. This new, modern, highly efficient, and highly precise weapon can be equipped with both a conventional warhead as well as a special, nuclear warhead.  Naturally, in the fight against terrorism that is unnecessary, and I hope there will be no need [to use nukes against the Islamic State].

But, if it is…. which of course was the unsaid message: Russia not only can deploy tactical nuclear warheads to Syria overnight, but it may, “not now”, but eventually be forced to use them against “the Islamic State.”

And just like that Putin hinted that the Syrian proxy war, as it escalates ever wider and drags in increasingly more countries in true “world war” fashion, may just have one or more mushroom clouds in its near future; clouds which will will target none other than the CIA’s pet project designed to take down Assad – the Islamic State. We are not sure if this particular cloud will have a silver lining, but we are confident that not even Turkey will want to buy ISIS oil if it happens to have the same radioactivity profile as Fukushima.

4 thoughts on “Putin Hopes “There Will Be No Need To Nuke” The Islamic State:”