So have those 6,000 military vehicles been sent to Germany (in preparation for WW3) or not? 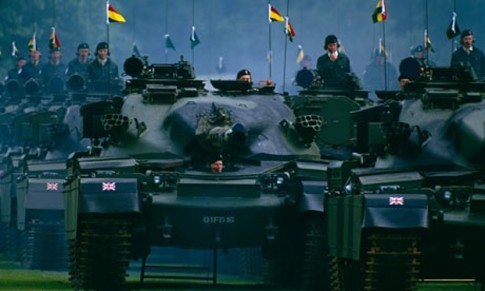 British tanks taking part in a parade. These and other army vehicles could be sent to Germany. Photograph: David Levenson/Alamy

Up to 6,000 military vehicles could be transported overseas so prime site in Gloucestershire can be sold to raise funds

It has been an awfully long time since British tanks rumbled their way across Europe towards the Rhine – 67 years, in fact.

So the Germans will be intrigued to learn the Ministry of Defence is plotting another push east, albeit an unconventional one that has been forced on it by budget cuts.

Thousands of the British military’s tanks, carriers and cars will head across the Channel because of MoD plans to sell off its vast complex at Ashchurch in Gloucestershire. This is where it stores or repairs up to 6,000 vehicles, ready for duty.

The problem of where to put them all when the 72-hectare (178-acre) site is sold has been troubling military planners, who have plumped for Mönchengladbach in western Germany. The city in North-Rhine Westphalia is home to the British-owned Ayrshire barracks.

Whitehall sources hope that moving tanks and other heavy vehicles to Germany will be only a temporary measure, buying time for the MoD to find a more permanent home for them in the UK.

But while the idea might be practical on some levels, insiders at the MoD can see the potential for farce.

The UK is in the process of withdrawing thousands of troops from Germany, at the same time as thousands of military vehicles could be heading in the opposite direction.

There will also be some anxiety about so many of them being relocated outside the UK, where they will not be ready for instant use in any emergency.

“Moving so many vehicles to Germany would be quite a feat, especially any tanks,” said David Willey, curator of the Tank Museum in Bovington, Dorset.

“You can only get one on every loader. Taking them to Germany would be quite expensive, and they need to be kept in a very secure environment because they have systems that the military need to protect.”

The sale of Ashchurch is one of the money-making measures the MoD is having to push through to raise cash at a time of budget cuts and redundancy rounds.

The land is a prime spot for property development, and plans are already being developed by the local council.

The site near Tewkesbury has been likened to an enormous garage, where military vehicles are stored and kept ready for action. It is the only storage facility of its type in the UK and has a staff of about 700, made up of military, civilians and contractors.

The most valuable vehicles are kept in a 47,000 sq m super-shed, which has controlled humidity. The UK has 300 Challenger 2 Tanks, and Willey said keeping them in good order was essential – because they are becoming irreplaceable.

“There’s no market to make them any more. I hope they will be looked after.”

Another source, who asked not to be named, said the idea had caused hoots of laughter when it was first suggested. “It wasn’t quite so funny when we realised this could happen,” he said.

A spokesman for the MoD said: “The Defence Infrastructure Organisation (DIO) has been considering the future re-provision of facilities to meet the ongoing operational need at Ashchurch.

“As part of this evaluation a number of options are being assessed that would render Ashchurch operationally surplus.

“Consequently, the DIO has engaged with the local authorities to discuss the future use for the Ashchurch site and the site has been allocated as a potential strategic allocation (should it close), alongside adjoining land to the north for around 2,100 dwellings in the Joint Core Strategy for Gloucester, Cheltenham and Tewkesbury, which is currently out for public consultation.

“This approach offers us an opportunity to address local needs as well as those of the MOD.”

Sources said the MoD would not have to send all 6,000 vehicles to Germany because there were other sites in the UK that might be used.

• This article was amended on 17 February 2012. The original picture showed Chieftan tanks, which are no longer in use. This has been updated with a photo of Challenger 2 tanks.