– NYT: Americans With Assault Rifles Should “Give Them Up For The Good Of Their Fellow Citizens”:

Well, it seems the media’s horrific campaign of inaccuracy hasn’t stopped. According to Reuters, for the first time in nearly a century, The New York Times editorial board took their plea for gun bans to the front page on Saturday, calling our nation’s inaction on gun control a “moral outrage and a national disgrace.” No, we shouldn’t be surprised that they decided to follow the likes of the Washington Post and the Los Angeles Times with their own inane call to arms for gun control. And we shouldn’t be shocked that they want policies that employ confiscatory measures, while also banning an entire class of firearms, specifically assault rifles and certain types of ammunition [emphasis mine]:

It is a moral outrage and a national disgrace that civilians can legally purchase weapons designed specifically to kill people with brutal speed and efficiency. These are weapons of war, barely modified and deliberately marketed as tools of macho vigilantism and even insurrection.
America’s elected leaders offer prayers for gun victims and then, callously and without fear of consequence, reject the most basic restrictions on weapons of mass killing, as they did on Thursday. They distract us with arguments about the word terrorism. Let’s be clear: These spree killings are all, in their own ways, acts of terrorism.

It is not necessary to debate the peculiar wording of the Second Amendment. No right is unlimited and immune from reasonable regulation.

Certain kinds of weapons, like the slightly modified combat rifles used in California, and certain kinds of ammunition, must be outlawed for civilian ownership. It is possible to define those guns in a clear and effective way and, yes, it would require Americans who own those kinds of weapons to give them up for the good of their fellow citizens.

First, let’s give it up for the New York Times, and their like-minded colleagues in the media–and in politics–for driving up gun sales. Undoubtedly, after all of this nonsensical discussion about gun control, gun and ammo sales will go up (that’s a good thing). The irony never ceases to amaze me how the very faction of this country what wants to deploy unconstitutional gun control measures, only end up becoming better gun salespersons.

Moreover, every mass shooting is an act of terror? They’re not. Mass shootings can be part of a terrorist’s arsenal of carnage to push whatever agenda they have in mind, but not every mass shooting is terrorism. The same logic is applied to defining genocide. Genocide is mass killing, but not all mass killings are genocides. What happened in Paris was a horrific terrorist attack perpetrated by ISIS. They had an agenda. They deployed suicide bombers and shooters to target scores of innocent Parisians, which they thought could influence the nation’s policy in the Middle East. The Islamic State attacked France for insulting the prophet Muhammad; they called Paris “the capital of abomination and perversion;” and–perhaps the most important part–the French were attacked due to their intervention in Syria. There are multiple definitions of terrorism; almost every singe one includes some form of political goal. There was no such goal when Adam Lanza senselessly murdered 20 schoolchildren in Newtown in 2012, hence why it was called a mass shooting, and not an act of terrorism. Concerning the San Bernardino shooting, it’s now a federal terrorism investigation. We’ll know in due time the motives and aims behind this attack.

The Times says that it’s easy to define “combat rifles,” though they apparently didn’t know the definition of terrorism–and the left has tried to do this back in the early 1990s with the Assault Weapons Ban. It was a laughable piece of comedy that was attached to the overall Violent Crime Control and Law Enforcement Act in 1994, that was partially responsible for historic Democratic losses in the midterm elections. When it expired in 2004, the data showed that these weapons are a) rarely used in crimes, which remains so to this day and b) did next to nothing to reduce violent crime. Oddly enough, the New York Timesran a piece in September of 2014 highlighting that fact:

…[I]n the 10 years since the previous ban lapsed, even gun control advocates acknowledge a larger truth: The law that barred the sale of assault weapons from 1994 to 2004 made little difference.

It turns out that big, scary military rifles don’t kill the vast majority of the 11,000 Americans murdered with guns each year. Little handguns do[*].

The policy proved costly. Mr. Clinton blamed the ban for Democratic losses in 1994. Crime fell, but when the ban expired, a detailed study found no proof that it had contributed to the decline.

The ban did reduce the number of assault weapons recovered by local police, to 1 percent from roughly 2 percent.

“Should it be renewed, the ban’s effects on gun violence are likely to be small at best and perhaps too small for reliable measurement,” a Department of Justice-funded evaluation concluded.

Lastly, the “it would require Americans who own those kinds of weapons to give them up for the good of their fellow citizens” part. Why? The vast majority of gun owners–99.9 percent according to Sen. Bernie Sanders–are law-abiding. They have to turn them over because the liberal political class is egregiously ignorant on this issue? They have to turn them over because while they aren’t used often in gun crimes, liberals are afraid of them? The Times has shown that the left is getting closer to outright saying having assault rifles in one’s home warrants the National Guard, FBI, ATF, and local law enforcement busting down your door, terrifying your family, and confiscating constitutionally protected items.

Any rational person should balk at this proposal. Any Second Amendment supporter would, as in other counties, should (and probably would) completely ignore the call to hand over their firearms. But if you’re a liberal–in keeping with their principle that government power should be controlled by the few in order to be dictated to the rest of us–you must believe this is a good policy. If ending gun violence enhances the public good, then by all means strip law-abiding Americans of their rights; the end result will pay off. It’s a perverse notion.

This is where this debate is heading–and it’s getting messier with each horrific mass shooting. The left is now mixing terrorism and mass shootings to push a narrative to eviscerate the Second Amendment. We once again have rehashed stories about the AR-15 rifle, which isn’t as powerful as a hunting rifle and rarely used in crimes. And we have the media endorsing gun control policies that would require gun bans and confiscation. They’re insinuating parts of it, but the brash call to ban guns entirely is coming.

Yes, not every right is absolute. There are restrictions, but government and active citizenry should work to maximize these rights to their fullest extent. The pre-existing laws on guns are fine. We need to have a debate on how to revamp our mental health system, and integrate it into our background check system. The problem is that it doesn’t accomplish the left’s goal of destroying gun rights, so they’ll do everything in their power to prevent that debate.

*Support for a handgun ban is insanely low. 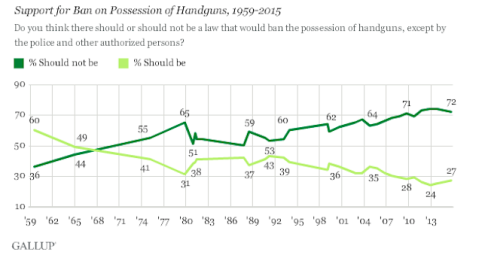 1 thought on “NYT: Americans With Assault Rifles Should “Give Them Up For The Good Of Their Fellow Citizens””