“There is no War on Terror. There is a war which is being waged using terrorist proxy groups and they are being used against nation states who are resisting U.S. and Israeli hegemony. And they are also being used as a means of disciplining the work forces in Europe. In a period of mass unemployment and austerity, you now have terrorist attacks being committed by terrorists funded, armed and trained by Western intelligence agencies. There is no such thing as ISIS. ISIS is a creation of the United States.”

Sam Gerrans is an English writer, translator, support counselor and activist. He also has professional backgrounds in media, strategic communications and technology. He is driven by commitment to ultimate meaning, and focused on authentic approaches to revelation and realpolitik. He is the founder of Quranite.com – where the Qur’an is explored on the basis of reason rather than tradition – and offers both individual language training and personal support and counseling online at SkypeTalking.com. 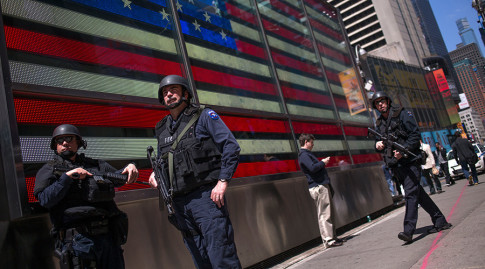 – Terrorism, tyranny and the end of freedom

Are the powers-that-be using crises such as recent events in Paris to drive through a tyrannical agenda?

Rahm Emanuel – Obama’s former Chief of Staff – once famously said “You never want a serious crisis to go to waste – it’s an opportunity to do things you think you could not do before”.

He was not saying anything new. He was simply rehashing something self-evident to those who deal in strategy rather than hysteria, and passing off as his own something said years before by Churchill.

Today, the world is hysterical about the recent serious crisis in Paris.

Naturally, these terrorist actions are tragedies for those individually impacted by them. But strategically, they are opportunities for “things you think you could not do before”.

A substantial minority of people have now got the point that since “a serious crisis” is so useful to those who rule us, our rulers will not only sit around waiting for things to happen which they can use, they will also initiate such things.

It was the events in New York on 9/11 – in which the laws of physics were apparently suspended – which allowed the Patriot Act to be pushed through and the Plan for a New American Century to be enacted.

But it took several years before opinions unencumbered by official propaganda percolated through society.

Due to the proliferation of social media, that same process of dissemination and cross-pollination of cynicism towards the official version of events was in full sway only a matter of minutes after the Paris bombings were announced.

And while the larger portion of the herd is running about crying out for someone to save it and the architects of policy are calmly ramming through their agenda, the new challenge is how to clamp down on dissent from media orthodoxy.

So what’s coming down the pike?

First off: boarder crackdowns. The Guardian recently noted that: “EU interior and justice ministers are to meet in Brussels where they will discuss tightening checks on all travelers at the external borders of the 26-nation Schengen zone as an emergency measure.

“Cazeneuve called on his fellow ministers to agree on a Europe-wide passenger information register, improved controls along Europe’s external borders, and better coordination against arms trafficking.”

“France has been calling for these measures for more than 18 months, and some progress has been made,” he said. “But it is not fast enough, and it does not go far enough … Everyone must understand Europe has to organize, recover, defend itself against the terrorist threat.”

The Independent informs us that EU ministers (i.e. those bureaucrats none of us voted for and whose power structure mirrors that of the Soviet Union’s Politbureau) are considering setting up their own “CIA-style intelligence agency”.

The current stampede will also help push through other items already openly on the agenda.

In the UK, for example, the government is busy enacting a bill to give police access to everyone’s entire internet history.

Richard Berry, the National Police Chiefs’ Council spokesman for data communications, told the newspaper: “We essentially need the ‘who, where, when and what’ of any communication – who initiated it, where were they and when it happened.”

In short: the police want access to your entire life.

Where this is going is total surveillance, general suspicion, and the removal of the velvet glove from the hand of power to reveal the iron fist which was there all along – all served up in the form of a palliative citing the need to protect us from an outside threat.

From Nero to Bush, nothing changes – except who benefits.

So who does benefit?

Western media are intractably incurious on such questions, barely daring to stray beyond the prescribed narrative and sternly serving up Pentagon press releases as news.

Interviewed by RT, Ó Colmáin stated boldly what many have already surmised but had been denied a platform beyond social media to express.

The points Mr. Ó Colmáin makes include the fact that the war against Syria is orchestrated by Nato; that it has been conducting attacks against the civilian population of that country for four years now, and that this itself is a “terrorist campaign”.

He states that there is a worldwide war the object of which is to make the world’s population submit to a “global order” – a war which serves the interests of what he rightly calls a “tiny and particularly tyrannical ruling elite”.

He says: “There is no War on Terror. There is a war which is being waged using terrorist proxy groups and they are being used against nation states who are resisting U.S. and Israeli hegemony. And they are also being used as a means of disciplining the work forces in Europe. In a period of mass unemployment and austerity, you now have terrorist attacks being committed by terrorists funded, armed and trained by Western intelligence agencies. There is no such thing as ISIS. ISIS is a creation of the United States.”

The powers-that-be are going to try to shut people like Gearóid Ó Colmáin up. And they are going to use the very “terrorism” that Mr. Ó Colmáin accuses them of creating to do it.

In July, 2015, Cameron set out plans to deal with people who question the official line. He is particularly concerned to contain – and we assume later to criminalize – “ideas” which are “based on conspiracy”.

Cameron asserts: “In this warped worldview, such conclusions are reached – that 9/11 was actually inspired by Mossad to provoke the invasion of Afghanistan; that British security services knew about 7/7, but didn’t do anything about it because they wanted to provoke an anti-Muslim backlash.”

In the meantime – as the Independent informs us – France has declared a “state of emergency for three months, allowing authorities to shut down websites and giving police sweeping new powers.”

Those powers “include the ability to put people under house arrest without trial and to block websites.”

As Orwell tells us in 1984: “In a time of universal deceit – telling the truth is a revolutionary act.”

And the “ruling elite” Ó Colmáin refers to is in the process of conflating such revolutionary acts with “terrorism”.

While people at Mr. Cameron’s level and above understand perfectly well how power works, if those whose interests Cameron represents get their way, we the people are to be forced by law to believe the type of foolishness which benefits precisely those interests Ó Colmáin had the forthrightness to identify.

If facts are thought so fragile they need laws to enforce their acceptance, once they are enacted it is time to stop pretending we are free and face reality: We are living under tyranny.

Given the right “serious crisis” of the kind Mr. Emanuel so enthusiastically embraces, the herd can doubtless be stampeded over the cliff of any form of resistance to the political will to drive such new laws through. And once such a principle is accepted, there is no philosophical barrier to expanding it.

The loss of what we thought of as our rights will be achieved under the cloak of what works best: appeals to decency and reasonableness and the need to protect the innocent.

While men such as Ó Colmáin are working to awaken the people to the specter of open tyranny, history and experience are against him.

Gustave Le Bon in his seminal work on realpolitik, The Crowd (1895) wrote: “Whoever can supply them [the masses] with illusions is easily their master; whoever attempts to destroy their illusions is always their victim.”

By that measure, Ó Colmáin will be thought a terrorist, and those who condemn him hailed as defenders of freedom.

Le Bon believed that the majority respects only tyranny and force and spurns freedom.

We are in the process of learning if he was right.