A few days ago, in “Turkey’s Trump Card: Erdogan Can Cut Russia’s Syrian Supply Line By Closing Bosphorus,” we suggested that if Ankara wants to retaliate against Russia for the raft of economic sanctions The Kremlin slapped on Turkey over the weekend, closing the Bosphorus Strait might be a better idea than attempting to do without Russian gas.

After all, Turkey gets more than half of its gas from Gazprom, and given Erdogan’s support for the various rebels battling for control of Syria, this might not be an opportune time for Ankara to try and negotiate with Iran for more supply.

Closing the Bosphorus however, would achieve two things. First, it would send a message to Moscow that not only will Ankara not apologize for inexplicably blowing a Russian Su-24 warplane out of the sky, Turkey will in fact escalate the situation further. Second, it would cut Russia off from a key supply route to Latakia. That’s not to say Moscow wouldn’t get there eventually, but Turkey could make things exceptionally inconvenient by blockading the strait.

Just yesterday, Interfax reminded the world that there are two Turkish subs on patrol near the Russian guided missile destroyer Moskva, which was sent to coastal Latakia in the wake the Su-24 downing. Here’s more (translated):

In the area of ??the Guards missile cruiser “Moskva”, covering the Russian airbase “Hmeymim” in the Syrian city of Latakia, there are at least two submarines of the Turkish Navy, according to the Istanbul media.

According to the Turkish General Staff, is currently on patrol in the eastern Mediterranean are submarines “Dolunay” and “Burakreis.” Submarine “Dolunay” went on patrol to the region on November 11 “Burakreis” – on 7 November.

Sputnik, citing “reports”, suggests that those subs may be “following” the Russian vessel. 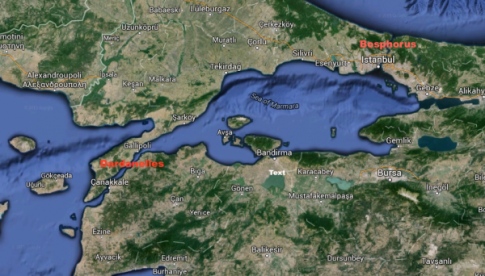 “The Russian ship, which was passing from the Aegean Sea into the Sea of Marmara, is believed to have been on its way to the Black Sea,” Sputnik says. “The video accompanying the news report was reportedly filmed in the city of Canakkale, on the southern coast of the Dardanelles, at their narrowest point.”

Meanwhile, a military-diplomatic source in Russia downplayed the “chance” meeting on Tuesday and also sought to dispel reports that Russian ships are facing delays in the Bosphorus. Some had grown weary after video sufaced that appeared to show vessels parked for “hours”:

“There are no problems with Russian ships passing through the straits, although it is quite normal that some vessels are waiting due to the straits’ workload or natural disasters, hampering navigation,” the source told RIA Novosti on Tuesday.

“As for the Turkish submarine, there is nothing extraordinary in the fact that she met with our cargo ship, given that the vessels regularly pass through Strait in both directions, as well as other ships of the Turkish Navy,” he added.

Draw your own conclusions.