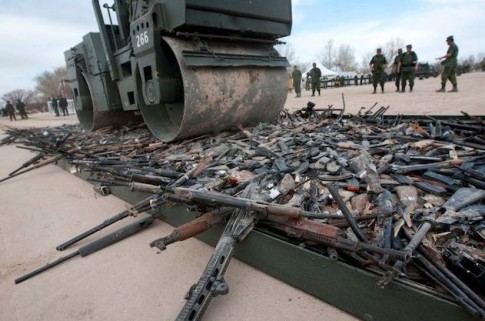 Back on September 11, Zero Hedge predicted the events which unfolded in Paris last Friday (and the resulting aftermath) with uncanny accuracy. Specifically, we said that “as the need to ratchet up the fear factor grows, expect more such reports of asylum seekers who have penetrated deep inside Europe, and whose intentions are to terrorize the public. Expect a few explosions thrown in for good effect” and we added that “since everyone knows by now “not to let a crisis go to waste” the one thing Europe needs is a visceral, tangible crisis, ideally with chilling explosions and innocent casualties. We expect one will be provided on short notice.“

It was two months later.

But it was the “fine print” forecast that was most troubling.

… the second key role of ISIS is also starting to emerge: the terrorist bogeyman that ravages Europe and scares the living daylight out of people who beg the government to implement an even more strict government apparatus in order to protect them from refugees ISIS terrorists.

Certainly expect a version of Europe’a Patriot Act to emerge over the next year, when the old continent has its own “September 11” moment, one which will provide the unelected Brussels bureaucrats with even more authoritarian power.

And while we are awaiting for a full blown European version of the Patriot Act, we can say that the second part of the forecast just came true, because this morning The European Commission announced it had adopted a package of measures to strengthen control of firearms across the European Union and meant simply to make it “difficult to acquire firearms.”

The package was adopted under the title “European Commission strengthens control of firearms across the EU.”

President Juncker said: “The recent terrorist attacks on Europe’s people and values were coordinated across borders, showing that we must work together to resist these threats. Today’s proposal, prepared jointly by Commissioners El?bieta Bie?kowska and Dimitris Avramopoulos, will help us tackle the threat of weapons falling into the hands of terrorists. We are proposing stricter controls on sale and registration of firearms, and stronger rules to irrevocably deactivate weapons. We will also come forward with an Action Plan in the near future to tackle illicit arms trafficking. Organised criminals accessing and trading military grade firearms in Europe cannot and will not be tolerated.”

Internal Market and Industry Commissioner El?bieta Bie?kowska and Migration, Home Affairs and Citizenship Commissioner Dimitris Avramopoulos added: “The adoption of the firearms package today is proof of the Commission’s determination to address the new reality we are confronted with. We need to remove regulatory divergences across the EU by imposing stricter, harmonised EU standards for firearms and ensuring efficient exchange of information between Member States.”

As Xinhua summarizes, the measures will help prevent terrorists from accessing weapons in the EU, better track legally held firearms and increase cooperation between member states, it said in a statement. The package of measures includes a revision of the firearms directive to tighten controls on the acquisition and possession of firearms, which need to be approved by the European Parliament and European Council.

An implementing regulation on common minimum standards for deactivation of firearms is included in the package, which sets out common and strict criteria on the way member states must deactivate weapons.

This regulation will be published immediately in the official journal and will enter into force after three months.

Putting this in perspective, the Patriot Act took months – the Commission’s crack down on weapons was completed in under 5 days.

And while on average European citizens are less weaponized than the US (except of course for the safest people in Europe, the Swiss, where 30% own guns ), just like that what little armaments can be obtained legally has been drastically reduced. As for whether this “Crack down” by Brussels bureaucrats will put even the tiniest dent in the procurement of weapons by ISIS, we have just one word: Chicago.

And here is the fact sheet released by the Commission to explain the prompt appearance of this proposal.

What changes to the Firearms Directive is the Commission proposing today?

On 18 November 2015, the Commission tabled proposals to amend the EU Firearms Directive (Directive 91/477/EEC as amended by Directive 2008/51/EC), the main objectives of which are:

To make it more difficult to acquire firearms, including deactivated firearms

Tighter rules on marking of firearms to improve the traceability of weapons by making them harder to erase (e.g. by affixing markings on the receiver), extending the obligation to imported firearms and clarifying on which components the marking should be affixed. Member States will have to keep the data until the destruction of the firearm (i.e. not only for 20 years as currently the case).

What are the common standards on deactivation?

Today’s package of measures also includes an Implementing Regulation imposing stringent minimum common guidelines for the deactivation of firearms which will render reactivation much more difficult.

The Firearms Directive specifies that weapons which have been rendered unfit for use are no longer considered firearms but pieces of metal which can move freely within the internal market without authorization/declaration. However, recent experience shows that deactivated arms can be illegally reactivated by using pieces from other deactivated arms, home-made pieces or pieces acquired via the Internet. The fact that there is no harmonised way to deactivate weapons across the EU increases the security risk.

To solve this problem, the Commission has prepared a Regulation that sets out common, strict, harmonised criteria on how Member States must deactivate weapons so they are rendered unfit to use. This is complemented by the ban on the possession of Category A firearms – even when they are deactivated. The Implementing Regulation is based on the criteria for deactivation developed by the Permanent International Commission for the Proof of Small Arms (the CIP).

The Commission has been negotiating this Implementing Regulation with Member States since April 2015 in the context of the comitology procedure, with discussions intensifying in the last few weeks. The draft text sent to Member States on Friday 13 November was adopted in committee on 18 November, following which the College adopted the implementing act on the same day.

What is the Commission doing to curb illegal trafficking of weapons and explosives?

In addition to the adoption of these stricter rules and standards today, the Commission also announced new plans to develop an action plan against the illegal trafficking of weapons and explosives. Issues to be tackled in this future action plan will include:

And always remember, they are from the (unelected) government, and they are not only here to help you, but make your life safer.