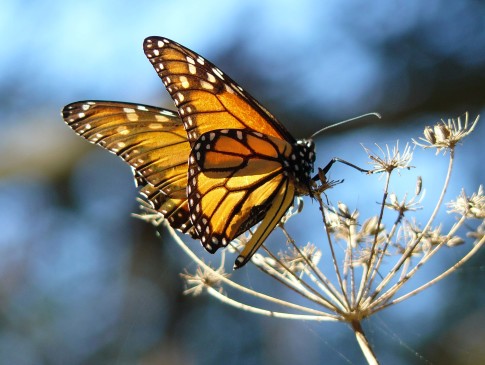 – Monarch Butterfly Populations Are Rising Again After Years In Decline:

This year, we have published several stories about the dwindling monarch butterfly populations and some of the efforts that have been made to save the species. New reports last week have indicated that these efforts may be paying off, because Monarch populations are actually beginning to grow again. In Mexico, one of the main breeding areas for these butterflies, scientists believe that this year there will be at least three times as many of them this year than there was last year.

During a recent conference at the Piedra Herrada research reserve, U.S. Interior Secretary Sally Jewell said that Mexico and the US will be working together to create pesticide-free zones for the butterflies to flourish.

“Mexico, the U.S., and Canada have many species that don’t know our political borders, that cross the borders freely,” she said during a conference at the Piedra Herrada research reserve, adding that the three countries will be working together to rebuild the populations.

She told the audience that they hope to see “225 million monarch butterflies returning right here to Mexico every year. We believe we can get there by working together and it sounds like we may be on our way, we hope.”

“We are very glad to report that calculations done before the landfall of Hurricane Patricia showed the monarch presence could cover up to four hectares, a clear indication that the efforts mentioned by Secretary Jewell are having a positive effect,” Environment Secretary Rafael Pacchiano said.

“We estimate that the butterfly population that arrives at the reserve is as much as three and could reach four times the surface area it occupied last season,” he added.

For years, environmental experts have been warning about the steady decline of monarch butterfly populations. The causes of this decline have been largely speculation until recently, but a new report suggests that Monsanto’s herbicide Roundup Ready could be responsible.

The report was recently released by US environment watchdog Center for Food Safety and sheds new light on what has been happening with monarch butterfly populations.

According to the report, Monsanto’s herbicide has wiped out 99 percent of milkweed in corn and soybean fields in the US Midwest since 1999.

This has resulted in a decline of nearly 90 percent in monarch butterfly populations in the past 20 years.

Without the milkweed, the butterfly’s food supply is entirely cut out because caterpillars eat only milkweed plants, and then milkweed is needed again when it is time for the butterfly to lay their eggs.

Although this is a very serious problem, it is something that the average person can help to solve. Anyone with some space in their lawn or garden can plant milkweed to help reverse the trend that Monsanto started.

Below are some PDF guides which give you step-by-step instructions on how to plant milkweed and create habitats for monarch butterflies: