– Refugee Blowback: More Than Half Of America’s Governors Oppose Entry Of Syrians:

First it was Texas. Then five other states – Louisiana, Alabama, Arkansas, Indiana, and Michigan – promptly followed in the footsteps of the Lone Star State in refusing to admit any Syrian refugees, despite the Obama administration promises to “carefully vet” any Syrian asylum seekers who may be headed to the US in 2016, some 10,000 according to early estimates.

It has since became an avalanche, and at last check, at least 27 states – represented by more than half the nation’s governors – say they oppose letting Syrian refugees into their states.

According to the count done by CNN, states protesting the admission of refugees range from Alabama and Georgia, to Texas and Arizona, to Michigan and Illinois, to Maine and New Hampshire. Among these 27 states, all but one have Republican governors.

Some leaders say they either oppose taking in any Syrian refugees being relocated as part of a national program or asked that they be particularly scrutinized as potential security threats.

Only 1,500 Syrian refugees have been accepted into the United States since 2011, but the Obama administration announced in September that 10,000 Syrians will be allowed entry next year.

The Council on American-Islamic Relations said Monday, “Defeating ISIS involves projecting American ideals to the world. Governors who reject those fleeing war and persecution abandon our ideals and instead project our fears to the world.”

A sampling of governor comments:

In announcing that his state would not accept any Syrian refugees, Texas Gov. Greg Abbott tweeted Monday on his personal account, “I demand the U.S. act similarly,” he said. “Security comes first.” In a letter to President Barack Obama, Abbott said “American humanitarian compassion could be exploited to expose Americans to similar deadly danger,” referring to Friday’s deadly attacks in Paris.

In a statement from Georgia’s governor, Republican Nathan Deal, he said Georgia will not accept Syrian refugees “until the federal government and Congress conducts a thorough review of current screening procedures and background checks.”

Alabama Gov. Robert Bentley also rejected the possibility of allowing Syrian refugees into his state and connected refugees with potential terror threats. “After full consideration of this weekend’s attacks of terror on innocent citizens in Paris, I will oppose any attempt to relocate Syrian refugees to Alabama through the U.S. Refugee Admissions Program,” Bentley said Sunday in a statement.

As the list of states blocking refugees grows, at least one state, Delaware, announced that it plans to accept refugees. “It is unfortunate that anyone would use the tragic events in Paris to send a message that we do not understand the plight of these refugees, ignoring the fact that the people we are talking about are fleeing the perpetrators of terror,” Gov. Jack Markell said in a statement.

Here is the full map and list of states that have opined either way toward future acceptance of refugees. 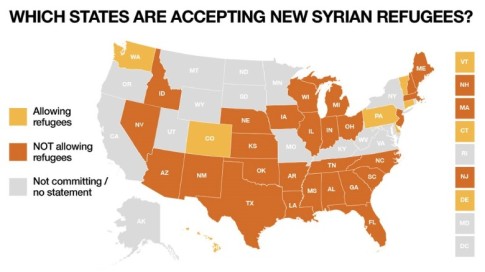 States whose governors say they will accept refugees:

All that said, the governatorial antics are purely for populist theater purposes: CNN quotes Kevin Appleby director of migration policy at the U.S. Conference of Catholic Bishops, according to whom “when push comes to shove, the federal government has both the plenary power and the power of the 1980 Refugee Act to place refugees anywhere in the country.” He adds that “one tactic states could use would be to cut their own funding in areas such as resettling refugees. The conference is the largest refugee resettlement organization in the country.”

WaPo confirms as much when it says that “state and local officials cannot physically prevent refugees from being resettled in their areas. All refugees who arrive in the United States must first be approved for legal entry by the federal government after a lengthy screening process and that their housing arrangements are made through long-term contracts and relationships with city, county and state governments.”

“Governors and state officials do not have the capability to prevent a refugee who is here and admitted lawfully to the U.S. from residing in their state. It is not something they can do,” said Lucy Carrigan, a spokeswoman for the International Rescue Committee. “There is a close collaboration with governors and mayors and community leaders about the capacity of the area for refugees and where they can go, but once they have legal status, you cannot impede their transit between different states.”

A total of about 1,900 Syrian refugees have been resettled in the United States in the past two years, all of them brought directly from camps and settlements in countries surrounding Syria. Carrigan and others said none of them had been part of the wave of migrants coming through Europe. The 1,900 are a tiny fraction of the 4 million refugees who are waiting in camps and settlements outside Syria. The International Rescue Committee, a nonprofit based in New York, has resettled about 250 of these Syrian refugees.

Still, the sense of ill-will toward the aliens will hardly set a welcome setting for new arrivals:

One former resettlement agency official, who asked not to be named, said there have been instances when some state governors declared they would not accept any more refugees, including some from Iraq, and that in those cases the agencies found them housing in a more welcoming region. “It has happened before,” the former official said.

Matthew Soerens, president of World Relief, noted that refugees sent to the U.S. for resettlement are “completely different” from those “showing up in huge numbers at the borders of Europe.”

They have been vetted by U.S. law enforcement and intelligence agencies and have to wait at least 18 months – sometimes years — before being admitted.

“It would be very short-sighted for a terrorist who wanted to do harm to the U.S. to try and come through a refugee resettlement program,” Soerens said. “They wouldn’t make it in.”

And with that we now know just what the “careful vetting” process involved: the assumption that any potential suicide bombing terrorists are rational and would not be “short-sighted” to do harm to the U.S. by coming through a refugee resettlement program.

In other words, the US government is confident potential terrorists can just police themselves, thank you.

As for the charade of state governors who are screaming against Syrian refugees hoping to score political brownie points, yet who have no authority but to do as the Federal government  instructs them, expect the theatrical status quo to go on and end with a bang when one day a suicide bomber, with a conveniently placed fake Syrian passport next to his mangled body, ends up killing a few hundred Americans in a rural city, or better yet for the second coming of the Patriot Act and the biggest US government apparatus ever, New York City once again.