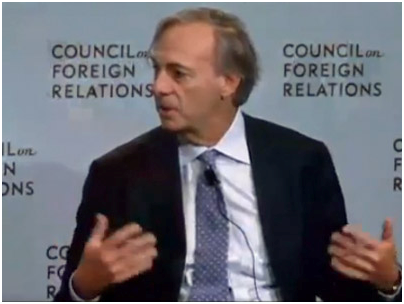 – World’s Largest Hedge Fund Dumped 31% Of Its US Equity Holdings In The Third Quarter:

The world’s biggest hedge fund, Ray Dalio’s Bridgewater Associates got into some hot water in the past few months when it was accused by many members of the underperforming “hedge fund hotel” club for being the “risk parity” catalyst that sent the market tumbling in August, and perhaps for being the catalyst for the August 24 market crash.

And while the bulk of Bridgewater’s asset are in various commodities and futures, most of which are never reported to the public, earlier today it did disclose its long holdings in public equities when it filed its latest 13F. Perhaps those accusing Bridgewater of being the market-moving catalyst did have a point, because after posting a total AUM of $10.8 billion at June, this total declined by a whopping 31% to just $7.5 billion as of September 30.

Here is what Brigewater was dumping (and adding).

Bridgewater sold 41% of its holdings in the world’s two largest EM ETFs in the third quarter amid a rout in developing-nation assets.  Specifically, it cut its investments in Vanguard Group Inc. and BlackRock Inc.’s ETFs to a combined 104 million shares, from 175 million in the previous three-month period.

The value of the ETF holdings dropped more than 50 percent to $3.4 billion as a result of share price declines and the divestments.

In other words, if anyone is looking for the culprits behind the aggressive ETFlash Crash of August 24, Bridgewater may indeed be a good starting point.

As a result of this major unwind in Emerging Market exposure, Bridgewater’s total US public equity holdings dropped 31%.

As Bloomberg adds, the company has said the impact of emerging-market losses is likely to be more widespread than in the crises of the 1980s and 1990s because investors have more money invested in developing markets. Of course, that also means that the company’s prior belief in an EM resurgence has gone the way of the “beautiful deleveraging.”

The reduction in the emerging-market investments marked a sharp reversal after Bridgewater had steadily boosted its holdings in recent years.

Its holdings in the $36 billion Vanguard FTSE Emerging Markets ETF dropped to 67.4 million shares by September, from a peak of 116.2 million in December. It had 19 million shares in June 2011.

Also notable: Bridgewater’s SPY holdings declined by 230,000 shares, which happened at the same time as Dalio was buying up single name constituents of the ETF. Was that the risk-imparity pair trade?

Finally, note that while Bridgewater was buying up single names as it was selling ETFs, it also sold half its AAPL stake.

Altogether, a dramatic deleveraging and gross derisking over the third quarter. The question is whether now that Bridgewater has once again rerisked, it will repeat the whole exercise all over again leading to the next market crash.

Finally, here is a break down of Bridgewater’s top 10 publicly held equities. 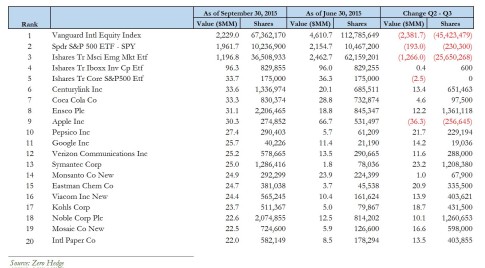