– The Stench Of Freddie Mac Is Back——An $18 Billion Spree Of Crony Capitalist Thievery:

Washington’s capacity to foster crony capitalist larceny and corruption never ceases to amaze. But according to Bloomberg, Wall Street’s shameless thievery from US taxpayers is about to get a whole new definition.

To wit, Freddie Mac is handing three private equity billionaires deeply subsidized debt financing in order to undertake $18 billion in rental apartment deals. According to no less an authority than Morgan Stanley, the subsidy embedded in this cheap financing amounts to 150 basis points or roughly $150 million per year on the loan amounts in play.

Yet this largesse will serve no discernible public purpose whatsoever. Indeed, over the 10-year term of these loans the bonanza will amount to billions, but it will not generate a single new unit of housing. Nor will it provide a single dollar of incremental rent relief to any low or moderate income tenant.

That’s because the purpose of these giant loans is not to fund new construction of rental housing—– for which there is currently an arguable shortage. And it’s not even to incentivize owners to convert existing apartment buildings to so-called “affordable” housing.

Instead, its sole effect will be to put the taxpayers in the business of  highly leveraged Wall Street deal making. That is, it will fund what amounts to apartment company LBOs being undertaken by the largest players in the private equity world including Barry Sternlicht’s Starwood Capital Group, Steve Schwarzman’s Blackstone Group and John Grayken’s Lone Star Fund.

Each of these cats are billionaires many times over and their remit most definitely does not include bolstering the social safety net. What they are doing is buying giant apartment companies in high priced takeover deals. These LBOs will shower sellers and speculators with windfall gains, and Wall Street dealers and themselves with prodigious fees now and the prospect of pocketing double, triple or quadruple their modest cash equity investments not too far down the road.

Freddie Mac, of course, is the one and same crony capitalist monstrosity that helped push the US financial system to the brink in 2008. If Washington had any common sense and gumption at all, it would have taken it out back and shot it years ago.

But the K-Street lobbies kept it alive during the dark days after the crash and have now invented a new mission to purportedly facilitate affordable rental housing. But that’s a crock, and the true purpose could not be more blatantly obvious than in the three deals described in the Bloomberg article.

Thus, Freddie Mac will loan the Lone Star Fund $5 billion to finance an LBO of Home Properties. Folks, the latter is a rental housing REIT that is publicly traded, more than adequately financed and in no need of help from the nation’s taxpayers whatsoever. In fact, it already has about $2.4 billion of plain old market debt.

But it can be well and truly said that the punters and hedge funds which own the stock have made out like bandits. Its share price has tripled since the March 2009 bottom, but more importantly, was up by 35% just in the 18-months prior to the June 2015 LBO announcement. 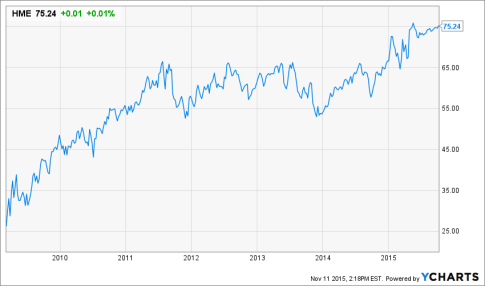 Did Home Properties earnings take-off in the last year or so, thereby warranting the stock price surge shown above?

So here is what was accomplished by putting US taxpayers in harms’ way in this instance.

A rental housing REIT with more than 100 communities and 40,000 apartment units, and which currently is comprised of about 30% “affordable” units under Freddie Mac’s elastic definitions, has been shuffled from public to private ownership.

The transaction was accomplished at the bubble era price of 25X net income—–a vastly inflated valuation which had been reached in June and which reflected the fact that the fast money boys had earlier piled on for the rumored takeover ride.

Yet without Freddie Mac’s funding of the takeout at this absurdly inflated price, the arbs and speculators who sold their stock into the recently completed deal would not have had a snowball’s chance of retaining their winnings.

That’s some public policy accomplishment, and its all there is.

Its proud new billionaire owner won’t be required to add a single additional unit of so-called “affordable” housing, and that term doesn’t mean much anyway. Freddie Mac’s definition includes about 60% of US households!

Well, there is one aspect which has changed, and not in a good way. What was a public REIT with $4.4 billion of equity market cap and $2.4 billion of debt has become a private LBO with $5 billion of debt and a deal fee tab in the order of $300 million.

As to the latter, it was some kind of Wall Street feast. Yet all of the deal commotion implied by this listing amounted to dead weight cost to society. This pointless LBO deal never would have happened on the free market:

In other words, the fools in Washington have descended so far down the rabbit hole of “help for housing” that they have managed to double the debt on these 40,000 rental units in order to cash out public equity investors who had no claim whatsoever to taxpayer support. Oh, yes, and to pay enormous fees to the deal banker, Goldman Sachs, which by all rights should be paying back taxpayers for its 2008 bailout, not scalping them yet again.

But when it comes to lunacy in the rabbit hole nothing comes close to another deal mentioned in the article—— the $5.3 billion LBO of Stuyvesant Town-Peter Cooper Village by Blackstone. It appears that Freddie Mac will provide $2.5 billion of the takeover financing, meaning the annual subsidy will be in the order of $40 million.

Let’s be clear about “Stuy Town” as its called. It has absolutely nothing to do with poor people or any plausible notion of a social safety net. It is a monster housing complex on the lower east side of New York which encompasses 80 acres, 11,000 apartment units and upwards of 35,000 middle class inhabitants—–a good sized city in most of America. 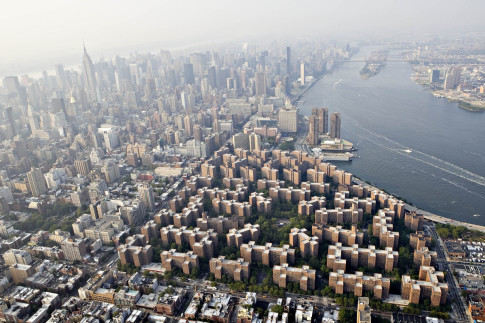 It also happens to be ground zero for one of the more spectacular housing debt crashes last time around. It had been a $5.4 billion leveraged buyout in 2006 by Tishman Speyer and a BlackRock fund.  The deal predicate was that this legendary rent-controlled complex originally built by MetLife for returning servicemen after WWII would slowly return to free market pricing as grandfathered tenants passed away or moved on.

Not surprisingly, the deal blew sky high during the financial crisis and resulted in billions of losses for the mortgage lenders. For the past five years it has been operated by a consortium of creditors whose foolish investments in this fiasco deserved no quarter whatsoever from the nation’s hard-pressed taxpayers.

Indeed, as time passed the creditors consortium had become desperate to find a mullet stupid enough to buy them out at a premium to their written down loan values, but the going was exceedingly tough. After all, the giant complex was still financially radioactive after upwards of $3.5 billion of losses from the 2006 LBO.

Moreover, additional headwinds arose from the fact that Stuy Town is a perennial object of local politicians demagogueing on behalf of “affordable” housing.

Then again that’s why we have oily politicians like Senator Chuck Schumer. As a real estate industry publication described it,

Their proposal was almost the exact opposite of Tishman Speyer’s 2006 bid: They would take on little debt and keep the apartments as rentals, eyeing steady returns instead of swift profits. And they deemed it essential to win over the city, tenants and local politicians — perhaps in part to New York’s senior senator, Chuck Schumer.

At a tenant meeting at Stuy Town last week, Schumer said the Tishman Speyer saga had taught him the need for “outside leverage.” “And I found a way,” he added. “I realized that to get such a huge mortgage, you need the backing of Freddie Mac and Fannie Mae.

So here is what’s going to happen. The busted lenders to the 2006 deal are going to make a killing by getting $5.3 billion for positions which are not remotely worth that.

At the same time, Blackstone will get subsidized financing from Freddie Mac, $225 million worth of benefits from New York City through an additional loan and uncollected taxes and the rights to sell the complex’s 700,000 square feet of air rights, which could be worth hundreds of millions.

Why all this largesse?

That’s right. The taxpayers of America are being dragged into a $5 billion LBO on the very site where an identical one blew up less than seven years ago—–purportedly to help families that are in the top 10% of income earners in the nation.

Needless to say, there is a simple alternative. Abolish Freddie Mac, Fannie Mae and all the rest of the Washington’s crony capitalist machinery and turn housing finance over to the free market where it belongs.

If there are citizens in need who can pass a means test and can’t work owing to age or genuine disability give them cash to fund their own shelter choices. And if they are able bodied and willing to work, top up their wages with earned income tax credits or similar cash transfers.

But let’s stop being stupid. Blackstone is not the United Way.